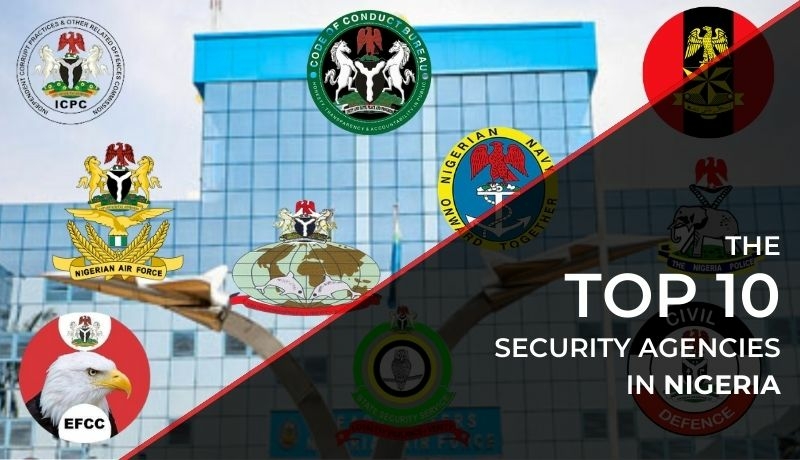 Nigeria has a number of top-rated security agencies, each with its own areas of specialization. If you’re looking for security services in Nigeria, it’s important to understand the differences between these agencies.

There are ten main security agencies in Nigeria: the Nigerian Police Force, the Nigerian Security and Civil Defense Corps, etc. Each of these agencies has its own strengths and weaknesses, so it’s important to do your research before making a decision.

In this article, we’ll take a closer look at each of these agencies and discuss what sets them apart from the others.

Here are The Top 10 Security Agencies in Nigeria

Nigeria has a number of security agencies, each with its own areas of specialization. The Nigerian Police Force is in charge of keeping peace and order and is the country’s main law enforcement agency.

Nigeria’s airspace is protected by the Nigerian Air Force, which is the country’s air warfare force.

Check out our list of the Top 10 Security Agencies in Nigeria:

The Department of State Services (DSS) is one of the top security agencies in Nigeria. It was set up in 1984, and its main job is to protect the political leaders and top government officials of the country.

The DSS has a wide range of responsibilities, including:

The DSS is a very powerful agency, and it has a lot of resources at its disposal. It’s made up of several divisions, including the

You might be wondering what the Nigeria Police Force is all about. Well, they’re responsible for law enforcement and maintaining public safety across the country. They’re also in charge of criminal investigations, and you can depend on them to protect you and your property.

The Nigeria Police Force is a well-funded organization, with a budget that’s constantly increasing. In fact, they just announced plans to purchase new helicopters and surveillance drones to help with their work. They also have a large number of officers, with over 350,000 currently on staff.

So what are the benefits of working with the Nigeria Police Force? Well, for one thing, they have a large pool of resources to draw from, which helps them solve crimes quickly. They’re also known for their professionalism and efficiency, which means you can count on them to get the job done.

The National Intelligence Agency (NIA) is one of the top security agencies in Nigeria. It’s responsible for gathering and analyzing intelligence related to national security.

One thing to note about the NIA is that it’s not just limited to Nigeria; it has a regional mandate that includes West Africa.

The Economic and Financial Crimes Commission (EFCC) is a Nigerian law enforcement agency that looks into financial crimes like money laundering, advance fee fraud (419), and embezzlement.

The EFCC was established in 2002 in response to the increasing rate of financial crimes in Nigeria. The commission is headed by a chairman and has a board of directors.

The EFCC is a member of the Egmont Group, an international network of financial intelligence units.

The EFCC has the power to freeze bank accounts, confiscate assets, and prosecute offenders.

Independent Commission on Corrupt Practices and Other Related Offenses (ICPC)

The ICPC is an anti-corruption agency in Nigeria that was established to investigate and prosecute all corrupt practices and offenses in the public and private sectors. The commission is an independent body, reporting directly to the president.

The ICPC was set up following the recommendations of the National Conference on Corruption held in Abuja in July 1998. People from both the public and private sectors, as well as civil society groups, were at the conference.

One of ICPC’s main objectives is to promote transparency and accountability in the management of public resources. The commission also wants to help people learn more about corruption and how it hurts society.

The Code of Conduct is a document that outlines the ethical standards that public officers are expected to adhere to. And the Code of Conduct Bureau is the agency that makes sure that everyone is following the code.

One of the things the bureau is responsible for is investigating allegations of misconduct against public officers. So if you have any information about a public officer who’s violating the code, you can report it to the bureau.

The bureau is also responsible for making sure that all public officers declare their assets and income. This is done to make sure that they’re not accumulating wealth unlawfully.

So that’s a brief overview of what the Code of Conduct Bureau is all about.

You might be wondering, what is the Nigeria Security and Civil Defense Corps? Well, it’s a paramilitary organization that was set up in 1964 to protect the country against internal and external threats. They’re responsible for things like border security, counterterrorism, and emergency response.

The Nigeria Security and Civil Defense Corps is a fairly large organization, with over 170,000 members. And they’re divided into several different departments, including Maritime Security, Aviation Security, and Disaster Management.

One of the biggest challenges they face is coordinating all of their activities across such a large area. But despite the problems, they still do an important job for the people of Nigeria.

The Nigerian Army is the largest component of the Nigerian Armed Forces and is responsible for land-based military operations. The army was formed in 1960, following Nigeria’s independence from Britain. The current Chief of Army Staff is Lieutenant General Tukur Yusuf Buratai.

The Nigerian Army has played a significant role in the country’s history, having fought in the Nigerian Civil War as well as participating in peacekeeping missions in Liberia and Sierra Leone. In recent years, the army has also been involved in the fight against Boko Haram.

The Nigerian Army is currently undergoing a major modernization program in order to better equip and train its soldiers. This includes buying new weapons and vehicles, as well as building new places for training.

The Nigerian Airforce is one of the most important security agencies in Nigeria. It is responsible for the protection of Nigerian airspace and the conduct of air operations in support of the country’s internal security. The air force also plays a key role in supporting the Nigerian military’s operations against Boko Haram and other terrorist groups.

The Nigerian air force was established in 1964, and it currently has more than 10,000 personnel. The air force is headquartered in Abuja, and its main base is located at Nnamdi Azikiwe International Airport. The air force operates a fleet of fighter jets, transport aircraft, helicopters, and drones.

The Nigerian air force has participated in a number of operations, both within Nigeria and abroad. In recent years, the air force has conducted airstrikes against Boko Haram targets in Nigeria’s northeastern region. The air force has also deployed troops and aircraft to support the Nigerian military’s efforts to retake territory controlled by Boko Haram.

The air force has also been involved in peacekeeping operations in Liberia, Sierra Leone, and Sudan. Also, the air force has helped the Nigerian government fight back against rebels in the Niger Delta region.

Since the 1980s, the Nigerian Navy has been engaged in combating maritime piracy and oil theft in the Gulf of Guinea. In recent years, the navy has also taken on a more active role in counterterrorism operations. The Nigerian Navy is going through a program to make it more modern so that it can better protect Nigeria’s maritime interests.

You need the best security agencies in Nigeria to protect you, your family, and your property.

How to Activate eSIM on Your Phone