“I Have Never Smoked In My Entire Life, I Pray Alot”- Singer Kcee 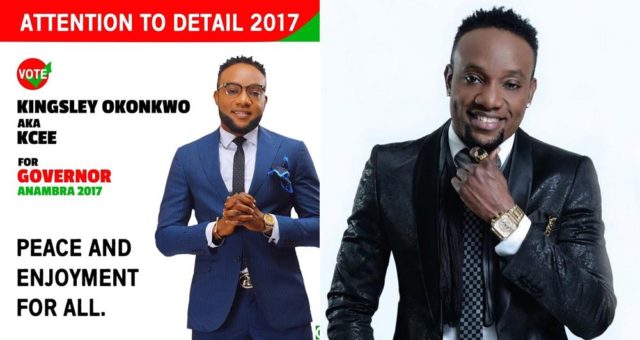 Nigerian singer Kingsley Okonkwo, popularly known as Kcee, has opened up on his career and other issues.

The singer, who recently revealed his ambition to become the next governor of Anambra state, in a chat with TOFARATI IGE of PUNCH, revealed he has never smoked in his life and also takes his governorship seriously.
See excerpts of the chat below;
Are you really serious about your ambition to become Anambra State governor?
It’s not a joke. It is a movement to serve and work for my people and offer them a valued experience that they would never forget. As a youth who believes in this country and in my state, I decided to come out.
We’ve been hearing that youths are the leaders of tomorrow for too long, and now that the age requirement for running for office has been officially reduced by the National Assembly, I’ve decided to make good use of the opportunity.
I am here to save the future.
The election is just a few months away, how do you intend to stand up against politicians who have been on the field for longer?
I know that they wouldn’t give me the chance because they’ve been doing it for a very long time. But if I have the support of the youths, we would emerge victorious.
I’m not scared; I just implore the youths to support me.
Which platform would you be running on?
I really cannot say much about that now because my campaign manager has instructed me not to say anything.
Do you have any prior experience in politics?
I’ve never been involved in politics before now. It is the hunger and drive for transformation and progress that is pushing me.
Shortly after you uploaded your campaign poster on the Internet, many entertainers also followed suit. Don’t you think that would make people not to take you serious?
Well, that is the industry for you. The attention and buzz I got when I put the poster online was massive and it was obvious that a popular youth had declared his ambition. Most of my colleagues think it’s a joke and they’re trying to cash in on the trend. But I am actually serious.
Artistes are usually fun lovers; do you think entertainers can cope with the rigours of political leadership?

Of course; life is easy. In America, everything is working for them. When Donald Trump won the presidency, a lot of people questioned how a businessman with no prior political experience could lead the United States.

They said the wife was a stripper and made all sorts of allegations but today, they live in the White House and they are the world leaders. I don’t care what anybody says about me; what matters is who I am as an individual. That I’m a musician does not mean I’m stupid. For example, I don’t smoke and I pray a lot.
But a lot of people think all entertainers smoke and drink. Mind you, this doesn’t mean that I’m better than those who smoke, or that they are better than me; it just goes to show that you shouldn’t stereotype people.
Is it that you’ve stopped smoking, or you mean you’ve never smoked?
I have never smoked in my entire life. The only time I’ve held a cigarette was while shooting a music video. If I want to unwind, I just take a little sip here and there, and I’m good.
Why did it take you four years from the time you released your last album till now before putting out another one?
The industry doesn’t support album projects and this makes some of us to see it as a waste of time, money and energy. After my last album, I was very busy travelling round the world performing, but I’ve never slacked in releasing singles.
The songs I’ve released after my last album are enough to fill up an album. Having that long interval between my albums doesn’t mean I’m a lazy artiste but I think this would be the last time that I would wait so long before releasing an album. I may even release one next year.
What inspired the title of the album, Attention to Detail?
The idea is for people to pay attention to me as a person, beyond the music.
I’ve been around for over a decade and there have been lots of ups and downs, so I just decided to talk directly to my fans and I want them to pay attention to Kcee.
Do you think the songs on this new album can actually do better than your past hits like Limpopo and Pull Over?
No artiste can answer that question because we’re not God. Even for Limpopo that brought me a lot of success, its video was the cheapest I’ve ever shot. The song was recorded in few minutes so there wasn’t much effort to it. I never knew that the song would become that big.

Pull Over was also the last song I recorded on my last album. I had actually planned to make a remix of Limpopo with Wizkid. But when we were in the studio, the producer, Del B, just played a beat and Wizkid started singing to it.
That is how we came up with Pull Over. This goes to show that you never really know which song would become a hit until it becomes one. For me, I’ve put in my best to this album and I believe it’s better than the last one but God has the final say. Five Star Music members are always flaunting cash; doesn’t that make people to demand a lot from you?
It does but we can’t stop it. That’s the lifestyle we live. I believe God would always give us the resources to help people.
People also criticise you for that, doesn’t it bother you?
Such is life. There is nothing you do that people wouldn’t criticise. When former President Jonathan was in office, people were abusing him, and the current president is also facing the same thing. I never get distracted by what people say.

So long as I know that what I’m doing is right, I am not bothered. A lot of people go on social media to say mean things to hurt you and bring you down but I don’t pay them any attention.
Artistes usually dump their record labels, sometimes without fulfilling their contracts. Why does this happen and can’t it be stopped?

It cannot stop. It has nothing to do with the industry but with the individual involved. A lot of people went through record labels and kept to their contracts.
There are some politicians that come into office and fulfill their campaign promises while some don’t, so it happens across all sectors. It’s more about the person’s upbringing. I think the best way to get out of this is to keep educating artistes that before you sign any contract, make sure you get your lawyers.

Most times, when these artistes come begging for record deals; they don’t have lawyers or family members. But when they begin to make little money, their parents and lawyers swarm around them and start giving them different kinds of advice.

Since it has also happened to you, has it made you weary of signing new artists and supporting young talents?

No, it has not. Inasmuch as there are bad people, there are also nice people in the world. I was signed to Kennis Music for a while and I kept to the terms of the contract.
I was with him recently and he said I’m one of the best artistes that he has worked with. Till today, we’re still friends. Meanwhile, some other artistes fought with him so you can see that it’s all about the individual.