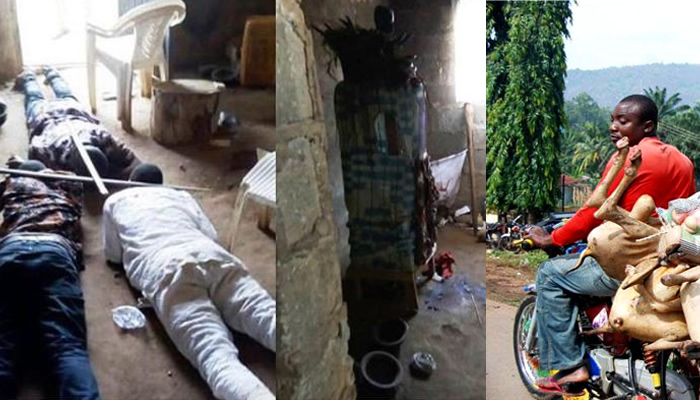 A hideout suspected to be a den of ritual killers has been discovered by a team of policemen and operatives of the Nigeria Security and Civil Defence Corps, at Odi Olowo, Bolorunduro, Ilesa, Osun State

A team of policemen and operatives of the Nigeria Security and Civil Defence Corps, have discovered a hideout suspected to be a den of ritual killers at Bolurunduro area of Ilesa in Osun State.

Our correspondent learnt that heavily armed security agents, acting on a tip off, stormed the den just before noon on Friday and arrested some suspects including a herbalist. Also recovered were the suspects’ tools used at the den which looked like a shrine.

A source told our correspondent that an okada rider, who escaped being kidnapped by the group, alerted the security agents who then raided the shrine.

The Public Relations Officer of the NSCDC in Osun State, Mr. Babawale Afolabi, who confirmed the arrest to our correspondent on the telephone, said officers of the agency carried out the operation in collaboration with some policemen.

The NSCDC PRO said, “ An okada rider, who said he escaped being kidnapped by the gang, reported to our office in Ilesa that some criminals were using a building at Odi Olowo, Bolorunduro area of Ilesa for ritual purposes.

“Our men along with some armed policemen went to the building and arrested three men at the shrine. Their telephone sets were also seized and the suspects were taken to the police station for further investigation.

“We want to advise the people of the state to be vigilant and conscious of happenings in their environment. They should also feel free to alert us or other security agencies of any suspicious movement in their areas. This will help us to make the state safer and make it a no go area for criminals.”

It would be recalled that security agents discovered some shrines in the state in 2017 and also arrested some suspected ritual killers that killed a student of the Osun State University.

COVID-19: Panic in Osun state as 6 persons who tested positive escape from Isolation…