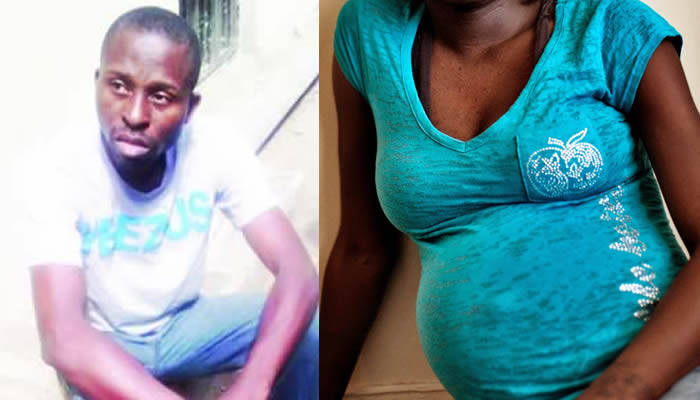 An orphan, Basirat, has been taken into protective custody by the Lagos State Government after she was allegedly abused by people who should have protected her.

First was her teacher, then her sister’s husband. It was learnt that Basirat had been put in the care of her sister who lived in the Ajah area of Lagos State, after her parents died in 2014 when she was barely 15, PUNCH reports.

She was enrolled in a private school in Ikota, where a teacher, Folorunsho Joseph, 34, allegedly drugged and deflowered her.

Her sister’s husband, 37-year-old Mukaila Bello, allegedly took advantage of the incident and defiled her repeatedly until she became pregnant.

Bello, an indigene of Kwara State, has four children and works with a charity organisation on Victoria Island, Lagos State.

After forcing Basirat to have an abortion in a chemist’s, Bello was alleged to have continued to have sex with her until she became pregnant the second time.

He allegedly took her to a hospital in the Orile area of the state where another abortion was carried out.

Lockdown: 17-year-old boy runs away from home after impregnating his…

“Some girls intentionally get pregnant and abort just to have…

The victim reportedly informed her grandparent, who relocated her to the Ijebu Ode area of Ogun State to live with some in-laws.

Bello allegedly visited and defiled her at the new place, which resulted in a third pregnancy.

He was said to have made her to have an abortion for the third time.

READ: Man kills 6-month-old baby over fear of wife will abandoning him

Basirat was taken to the Mirabel Centre, Lagos State University Teaching Hospital, Ikeja, where medical tests were carried out on her.

The test results reportedly confirmed that she was defiled.

Basirat, who spoke with our correspondent, said her ordeal started after her parents died.

She said, “After their death, I went to stay with my sister in Ajah where I was enrolled in a secondary school in Ikota. One day, my teacher asked me to bring a textbook from his house. When I got there, he gave me something to drink and I slept off. By the time I woke up, he had deflowered me. When I got home, I told my sister and her husband. They went to the teacher’s house with a policeman, but he had fled.

“After the incident, my sister’s husband started making advances at me. One day, we went to take one of his children from school and he stopped by at a hotel. He said he wanted to sleep with me, but I refused. He said he had taken a drug already. He forced himself on me in the presence of the small child.”

She said she could not tell her sister because she had high blood pressure, adding that the abuse continued until she became pregnant sometime in 2015.

Basirat said the suspect pleaded with her not to tell anyone so as not to “destroy the family,” adding that she had an abortion.

She said the abuse went on until she became pregnant the second time in 2016 and was forced to have another abortion.

“I had the chance to stop living in the house when I went for a festival with my grandpa in Agbowa, Ikorodu. I told him that I was not returning to Ajah because my sister’s husband had impregnated and aborted for me twice,” she added.

She claimed that an aunt who stayed in London arranged for her relocation to Ijebu Ode, the hometown of her (the aunt’s) in-laws.

Basirat claimed that while she was waiting to go to Ijebu Ode, Bello used the grandpa’s phone to speak with her.

“He called my grandpa and asked him to give me the phone. He queried me for telling them about what had been happening and ordered that I recant my statements, but I refused.

“He (Bello) later said he wanted to give me a phone and he would bring it to Ijebu Ode. Shortly after I got to Ijebu Ode in May 2017, he came visiting and slept with me. He did it about three times. He said his friend stayed in Ijebu Ode. I became pregnant the third time and he gave me money for the abortion,” she said.

It was learnt that the suspect allegedly became desperate to have Basirat back and pestered her to call her grandpa and deny her allegations against him.

When she didn’t bulge, the suspect was alleged to have started monitoring her activities on Facebook through the phone he gave her in Ijebu Ode.

Basirat said she had added a male colleague in a tailoring shop on Facebook when the suspect called and accused her of having a boyfriend.

“He called the person I was staying with on the telephone. He told the man that he should chase me away from the house because I was evil.

“The family asked me what was going on and I told them it was my sister’s husband and he had already threatened that if I didn’t return to his house, he would do something to make sure those I was living with chase me out,” she added.

However, the daughter of the man with whom Basirat lived in Ijebu Ode, Kaosara, said Bello was known to her family as Basirat’s boyfriend.

She said she warned Basirat not to have another boyfriend since she had a serious suitor.

Kaosara said the relationship progressed and she once asked the suspect for money for Basirat’s aso ebi for a wedding, and he allegedly sent N4,000.

“All this while, we never knew Mukaila (Bello) was Basirat’s sister’s husband. However, we noticed that he was always monitoring her.

“One day, the girl got fed up and she confessed that the man was her sister’s husband who after impregnating her twice, followed her to Ijebu Ode and impregnated her the third time. She said she had told him she was not interested in the relationship, but he had refused to let go of her,” she said.

Kaosara’s stepmother, Asisat, claimed that Bello gave her beverages while introducing himself as a suitor, which she rejected.

She said she was surprised at their age difference and asked the 37-year-old why he was not married.

“He said it was a long story. He said he was serious about marrying Basirat. I asked the girl about the man’s wife and she said he had chased her away. She didn’t say he was her sister’s husband.

“When the secret leaked, the man confessed to me and said he needed to ask for her forgiveness. He later told me he had actually slept in our house the previous day and forgot a phone, a T-shirt, a power bank, and an ATM card. He sent one Friday from Ajah to pick the items.

“Because we wanted to end the immoral relationship between him and the girl, we quickly handed over all the items to Friday, including the girl’s phone. We also destroyed her SIM card. However, the polythene bag in which the boy took away the items tore and two cheques fell. I angrily tore one; Kaosara kept the second cheque,” she added.

Officials of the OPD were said to have reported the case at the Area J Police Command, Elemoro, and the suspect was arrested.

Our correspondent was told that the suspect denied the allegations, including the claim that he visited Ijebu Ode to see Basirat.

A source at the OPD, however, said investigations by the agency revealed that the abortion took place in three different places.

He noted that the teacher who first raped her in 2014 and one of those who conducted the abortions had been arrested.

He said, “The girl was 15 when the teacher defiled her at Ikota. The main perpetrator, Bello, father of four children, took advantage of that and raped her as well. He forced three abortions on her.

“The teacher, who changed school after the act, has been arrested at his new school in Ikota.

“Although the main perpetrator is denying the allegations, the people at Ijebu Ode found a cheque he forgot in the victim’s room and he will have to explain how it got there, among other evidences against him.”

The Director of the OPD, Mrs. Olubukola Salami, described the acts as “heinous”, saying justice would be done.

She said, “We will continue to ensure that perpetrators of such dastardly acts are brought to book, especially in view of the inauguration of the sexual offences court in Lagos State. OPD affirms its stand with the Governor of Lagos State, Akinwunmi Ambode, that there will be no room for sexual offenders in the state.”

When contacted, the state Police Public Relations Officer, SP Chike Oti, confirmed the incident, adding that the suspects had been arraigned before an Igbosere Magistrate’s Court on Friday.

A charge sheet obtained by our correspondent showed that the main suspect, Bello; the teacher, Joseph; and the chemist, Amaechi Emmanuel, were arraigned on four counts before Magistrate Patrick Adekomaiya.

The third suspect, Emmanuel, was arraigned for carrying out an unlawful abortion.

The police prosecutor, Friday Mameh, who stood in for the resident prosecutor, Peace Chukwudi, said the offences were contrary to sections 137 and 147 of the Criminal Law of Lagos State, Nigeria, 2011.

Adekomaiya, who was represented by another magistrate, N.A. Layeni, admitted each of the three defendants to bail in the sum of N100,000 with two sureties each in like sum.

Layeni said each of the sureties must present evidence of tax payments and must deposit N10,000 to the Chief Registrar’s account.

READ: Married woman beaten, thrown inside well for demanding N3,000 after sex with a stranger