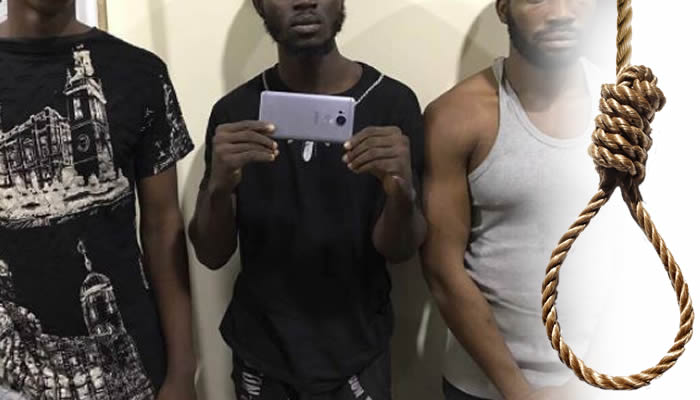 An Abeokuta High Court on Thursday sentenced three men to death by hanging for armed robbery, conspiracy and rape while the fourth accused, Oguntolu Oludare got 10 years imprisonment for receiving stolen goods.

He said: “Having found that the accused persons are guilty as charged, the first, second and third accused shall be hung by the neck until they are dead. May the Lord have mercy on you.

The convicts also docked for raping the couple’s daughter.

The convicts, according to the prosecution, committed the offences on February 5, 2012 at about 1:00 a.m. at plot 8-10 Martins-Thomas Crescent, GRA Extension, Ojere, Abeokuta, at a gun point with other offensive weapons.

The prosecution said the convicts gained access into the house of Martins-Thomas through the window by cutting the burglary proof.

The prosecution said the convict tied Martins-Thomas and his wife up and hit the man with the boot of a gun before shoving him into a bathroom.