Being the first son of a man ranked by Transparency International as the 4th most corrupt leader in recent global history, Ibrahim also became spectacularly wealthy.

He was into series of business deals. A lawyer and businessman, Ibrahim Abacha was described by his loved ones as very nice, extremely humble, easygoing and gentle, he was 28.

Upon his tragic death, Maryam Abacha was shattered and had to leave for the Kingdom of Saudi Arabia where she stayed temporarily, prayed, meditated and sought for consolation in her faith and God. 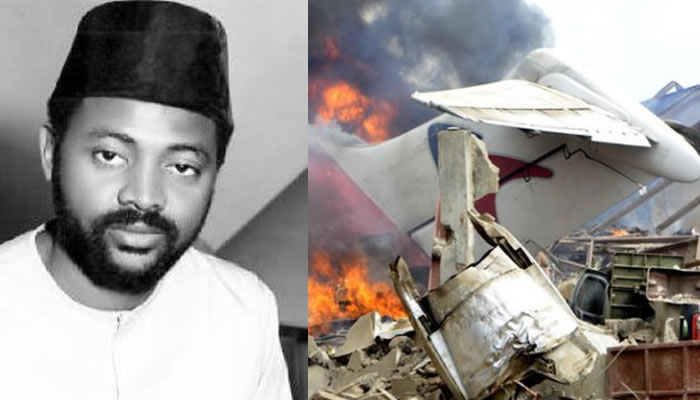 On that fateful day, 17th of January, 1996, Ibrahim and his friends were going on a jolly ride from Lagos to Kano for a party and family engagement. He was travelling in the Nigerian Air Force presidential Falcon jet in the company of 14 other friends when just minutes to the landing at the Aminu Kano International Airport, the aircraft crashed and exploded mysteriously. Ibrahim was with Funmi, his Yoruba girlfriend and a younger brother of Aliko Dangote named Bello, now the richest black in the world. Bello Dangote’s death was described as a major shock and huge loss with Dangote describing him as the closest person to Dangote in the group and a ‘great thinker and visionary.’

The crash shook the country and even the most avowed enemies of Abacha sympathized with the tyrannical despot. Chief Michael Ajasin said of the tragedy:

‘The death of Ibrahim Abacha is not only a shock to me but all NADECO members. The death is a blow to the nation.’

Ibrahim Abacha’s name was also mentioned in some controversial deals. Back in time, during one of the most prominent looting and money laundering cases, an associate of the Abacha family, Abubakar Atiku Bagudu (who was the governor of Kebbi State) told the court that in February 1994, he and Ibrahim established the Morgan Procurement Corporation saying:

‘I agreed to work with Mr. Ibrahim Sani Abacha in 1994 because the latter had a huge fortune and I had a lot of ideas about how to invest or manage the fortune. At about that time, my fortune was much smaller…’

Also, when investigations were launched by the United States Congress into the abuse of money launderers of private banking and corresponded banking services, it was discovered that Abacha’s sons (Ibrahim and Mohammed) first became clients of Citibank’s private banking group in 1988. Also, in the course of its commercial relationship with the Abacha brothers, Citibank provided them with various secrecy-related services including three special name accounts, at least one offshore shell company and even the use of codes to refer to their accounts. 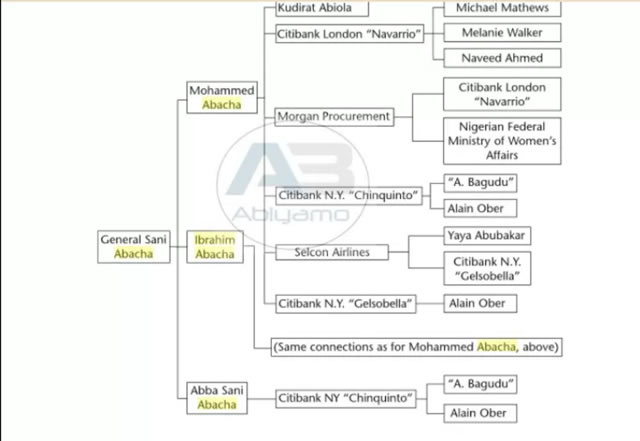 In London, the Abacha’s accounts held balances of up to US$60 million at one time, while in New York, their balances tended to stay under US$2 million, although US$47 million moved through their New York accounts in one six-month period. Alain Ober was the Citibank official who oversaw the Abacha’s accounts. He testified to the Permanent Subcommittee on Investigations of the Committee on Governmental Affairs in the United States. The Nigerian government is yet to recover all the looted money.

MARYAM ABACHA’S EARLIER MARRIAGE: Although Ibrahim bore the surname of the Nigerian dictator, he was not his biological father. Maryam Abacha was initially married to a man close to Major-General Shehu Musa Yar’adua’s father (Abacha later imprisoned Shehu Musa Yar’adua in the Abakaliki Prisons where he was eventually killed on the 8th of December, 1997 in a most cruel manner when a legitimate doctor administered a toxic injection on the helpless general on the orders of the dictator).

It was reported that Maryam Abacha was actually betrothed to Major-General Shehu Yar’adua’s fahter’s friend and she later married the man and she was pregnant for him when her teenage lover, Sani Abacha, took her away from the first husband, married her and claimed the baby, Ibrahim, as his own.

Ibrahim was actually someone else’s child but the head of state raised him and led the world to believe he was his first son. According to Binta Yar’adua, wife of the late Shehu Yar’adua:

‘He is Shehu Usman, Sarkin Maska from Funtua district in Katsina. And he happens to be my father. He was the district head of Funtua, and one time, a cabinet minister in Saraduna government. He happened to marry Maryam. He was a minister. I think in the middle of 1965. And Shehu’s father (Yar’adua) had nothing to do with my father’s marriage to Maryam. When TELL asked her about the speculated problem between the Yar’adua and Abacha’s family over the paternity of Ibrahim, Binta said, ‘I wouldn’t know. I don’t know. He could be my father’s son. He could be Abacha’s son. I don’t know…Well, he (Ibrahim Abacha) was born in our house. She (Maryam) was still married to my father when Ibrahim was born…I wouldn’t say it’s forceful (marriage) because it did not look like it was a forced marriage…Maybe about two years. One and a half or two years Ibrahim Abacha was born in our house. –Binta Yar’adua, TELL, July 3, 2000, pp 14-17.’

ALLEGATIONS OF STATE-SPONSORED TERRORISM: Some reports around that time pointed all fingers at General Sani Abacha himself. It was later reported by TELL (‘How Abacha Killed His Son’, February 15, 1999) that security officers, on the instruction of General Abacha, arranged the plane crash so as to end ‘the odium that the paternity of (Ibrahim) had caused the dictator…’ TELL, Cover interview, July 3, 2000, page 15. It is not clear if the crash was investigated at all and it was also reported that attempts by relatives of some of the other 14 victims of the crash to recover the bodies of their dead loved ones were blocked by General Abacha.

The precise cause of the crash remains unknown as there are conflicting reports about the tragedy. One report stated the pilot was inexperienced while another said the plane was carrying too many people while another stated there was an engine failure. Whatever the case, his loved ones have not forgotten him. In January 2016, his sister, Gumsu took to social media to mourn him, she wrote:

Ibrahim Sani Abacha. ..20 years today. Allah ya jikan ka da rahama. Amin. .. u will never be forgotten. .. I remember so well the last time i saw u and u were giving Inna a goodbye hug.. not knowing it was actually gonna be The Last Goodbye.

17 things you should know about the Emir of Kano, Muhammadu Sanusi II