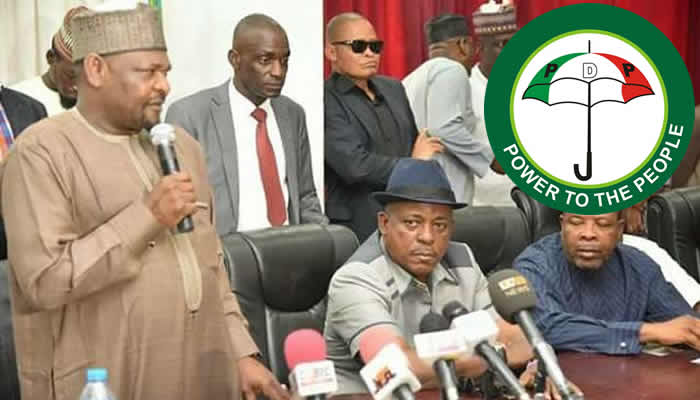 2019 Election: We apologise for our mistakes, says PDP as they appeal for votes

National Chairman of the Peoples Democratic Party PDP, Uche Secondus, has apologised to Nigerians for what he described as mistakes made while the party was in power prior to the 2015 general elections.

The Peoples Democratic Party (PDP) on Monday in Abuja, apologised to Nigerians for the mistakes the party made while in power. National Chairman of the party, Mr Uche Secondus, made the apology at a public national discourse on “Contemporary Governance in Nigeria.”

“I hereby, as the National Chairman, do admit that the PDP made a lot of mistakes; we are humans, not spirits and the ability to admit is key in moving forward.

“We admit that we have made several mistakes; we have passed through all our challenges and have acquired the experience no other party can boast of.

“We were sanctioned by Nigerians at the polls in 2015; let me use this opportunity to apologise for our past mistakes. “It is the honest thing to do, a legacy to transfer to our children; we cannot continue like that. “When we make mistakes, we should come out boldly to the people and apologise.

“It is important to do so because we have learnt from our mistakes unlike the All Progressive Congress (APC) that will make mistakes and lie to cover it. “We apologise to Nigerians that we have made mistakes, we have learnt our lessons and we are ready to begin on a new agenda; experience is the best teacher, no other party has it,” he said.

According to Secondus, when things are not positive and the mindset is negative, it is then time to reset it. He said that the public discourse was an ample opportunity for the party members to collectively “press the reset button’’ and set a new agenda for the nation.

According to him, there was too much power at the party’s National Headquarters, and going forward, power will be devolved to the wards, states and zones. The chairman said that candidates did not need to come to the headquarters to canvass for votes, adding that power and votes now resided at the grassroots.

He said “what went wrong in the past was part of evolution and the PDP at 20, is more matured to deliver on the wants of Nigerians.’’ He said that the new agenda was to move the party from what it used to be to what it should be.

Secondus said that the PDP had be celebrated and mourned, won and lost elections, promoted and demoted and had remained strong with a unity of purpose. He said that the party was aware of the cries of the people of Benue, Kaduna, Plateau, Taraba, Kogi, Enugu, Lagos, Edo, and that it was morally bound to react favourably to the yearnings of the people.

Secondus said that the repositioned PDP had a new mechanism that would interact with people at the grassroots and hold leaders accountable. In his contribution, a chieftain of the party, Chief George Bode, said that the position of the party leadership rekindled his loyalty. Bode called on members of PDP who left the party as a result of its past mistakes to return home from “wilderness’’.

According to him, to err is human and forgive is divine, it was time to walk the talk for the repositioning of the country. One of the panelists at the event, Ms Toyosi Ogunshiji, commended the party for toeing the line of honour. She said that Nigeria must move from praying to taking more serious actions for the progress of the country.

Ogunshiji said that the country needed statesmen “who think about the people and not politicians who think about the next elections’’. According to her, Nigerians only voted against President Goodluck Jonathan in 2015 and did not necessarily vote for President Muhammadu Buhari. She said that the electorate who would be seen in the 2019 general elections would be different from those politicians had seen in the past.

While calling for rigorous training of public servants, Ogunshiji said that the level of political awareness of the electorate would shock politicians in 2019. According to her, it is the quality of candidates put forward by political parties that will determine the outcome of the polls.