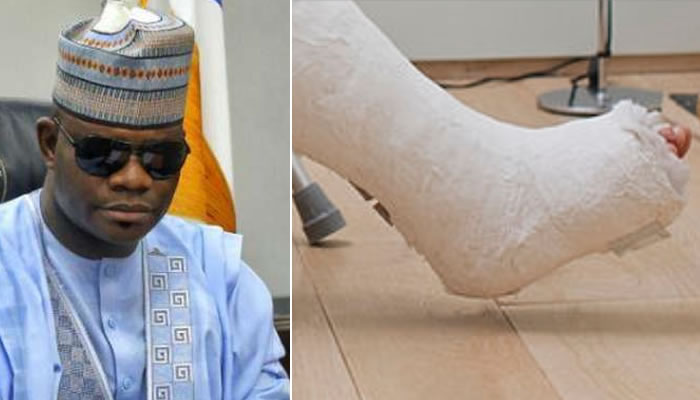 Governor Yahaya Bello of Kogi State fell off while alighting from his official car on Friday, March 30, and injured his left foot, a statement from the Kogi Government House, Lokoja, said on Tuesday.

The statement signed by the Director General, Media and Publicity to the Governor, Mr. Kingsley Fanwo, said the incident happened at the Old Market area in Lokoja, when the governor was waiting to receive the Speaker of the House of Representatives, Mr. Yakubu Dogara.

The Speaker had visited Lokoja for the burial of Mr. Umar Buba Jibril, a member of the House of Representatives, who died in Abuja on Friday.

“The injury prevented the governor from attending the burial of Jibril. He was represented by his deputy, Mr. Simon Achuba,” the statement said.

It dismissed claims that Bello was hospitalised and incapacitated, stating that the governor was promptly treated by his doctors, who bandaged the leg and discharged him.

The government thanked the governor’s supporters for their concern over his health, saying that Bello was doing well and would resume work after the Easter holidays.

The News Agency of Nigeria reported that the clarification was necessitated by reports that the governor was critically injured in the accident.

However, a source who witnessed the accident told one of our correspondents that the governor, who was trying to alight from his car, a BMW which is smaller than his official Prado Jeep, tripped and sprained his left ankle and his two arms.

The eyewitness disclosed further that the car dragged the governor for some metres before he was rescued by some people and his security details.

He added that the governor was rushed to one of the private hospitals in Abuja for further treatment.

But Fanwo, in a statement on Tuesday, said Bello only injured his left foot while alighting from the vehicle.

Due to the accident, Bello on Tuesday attended a meeting at the Presidential Villa, Abuja on crutches.

The meeting was between President Muhammadu Buhari and all the governors elected on the platform of the ruling All Progressives Congress.

Bello attractted the attention of his colleagues and others when he arrived the Council Chambers venue of the meeting on crutches.