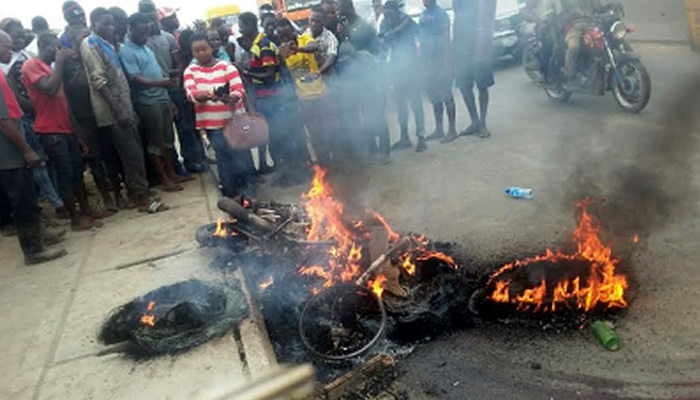 It was the end of the road for three suspected motorcycle robbers as they were burnt to death by a mob at the popular Abuochichie Junction in Bekwarra Local Government Area of Cross River State.

An eyewitness, Andrew Okpeche, said the suspects were members of a syndicate, which specialised in stealing motorcycles and knocking them into pieces before selling them to spare parts dealers.

He said: “The three of them—Ironman, Ogar and Olom— have been in the ugly trade for long and they have made quite a fortune from the illicit trade over the years. But luck ran out on them yesterday, when they were caught in the act.

“They also rob people at gunpoint on the road, especially during market days because a lot of people come from far and wide to buy yams and garri from the market.

“So they have information, trail people and rob them of their cash, besides their motorcycle-snatching business. “Two of them were from Bekwarra, while the third person was from Obudu. But they connected well because of their trade.

“One of them was a father of three, but we know him as a notorious criminal because he started out robbing market women years back.

“The people of Abuochichie gave them a long rope by warning them several times to desist from such trade. But they refused. That was the reason they were set ablaze at the junction.”

A Police source told newsmen that it was true that three persons were burnt to death for stealing motorcycles.

The source said: “Before our men got to the scene at Abuochichie Junction, it was already too late. They were burning due to the petrol and tyres the mob used.