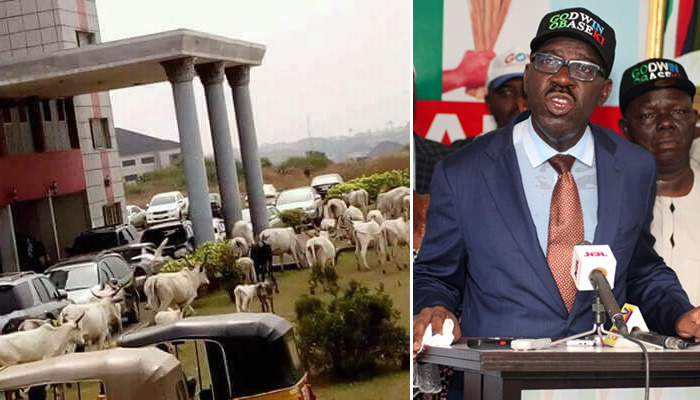 The affected communities include Odighi and Odiguete, in the Ovia North-East Local Government Area of the state.

Obaseki also ordered the arrest of any erring herdsman during the period of the ban, which he said would last for 90 days to enable the government to identify those lawfully allowed to graze in the areas so as to prevent further attacks.

The governor’s order came 48 hours after residents of Odighi community protested at the Government House against the killing of a pastor, the late Pius Eromosele, by suspected herdsmen.

The protesters, who laid the coffin of the deceased at the entrance to the Government House, had called for the arrest and prosecution of the killers.

The remains of the pastor of the Church of God Mission were said to have been found decomposing in a bush during a search by hunters and vigilance group members on April 2.

Speaking during a meeting with members of the Odighi, Owan and Odigwuetue communities at the palace of the Enogie of Odighi, the governor said the ban became necessary to stop further killings as the duty of his administration was to protect the lives and property of the people.

He also stated that a special task force, comprising various security agencies, would go round the affected communities within two weeks to get information that would help dislodge the criminals who posed as herdsmen in the forest.

Obaseki said, “We have set up a special task force made up of the Nigerian Army, the Nigeria Police, the Department of State Services, hunters and vigilance groups to comb bushes and dislodge squatter camps of killer herdsmen and ensure that no grazing takes place in Odighi, Odiguetue communities and their environs.”

He stressed the need to separate herdsmen from cattle rustlers, whom he said stole cattle, invaded farms, raped and killed people, even as he assured that efforts were being made to identify the “real herdsmen” in the state.

“Before now, Fulani herdsmen were known for carrying sticks around to control their cattle. Today, some of them have become criminals,” he added.

Obaseki also said his administration would boost agricultural activities in Odighi community which was once known as the food basket of the state.

He also pledged to fix the water system in the area and reconstruct the old roads in the community to open up the area for development.

The governor said, “We have taken the designs of the old roads in these areas and in two weeks’ time, we will start the reconstruction of the roads. Tomorrow (Monday), government officials will be here to check the water system in the communities and fix it; so that the people will have access to potable water.