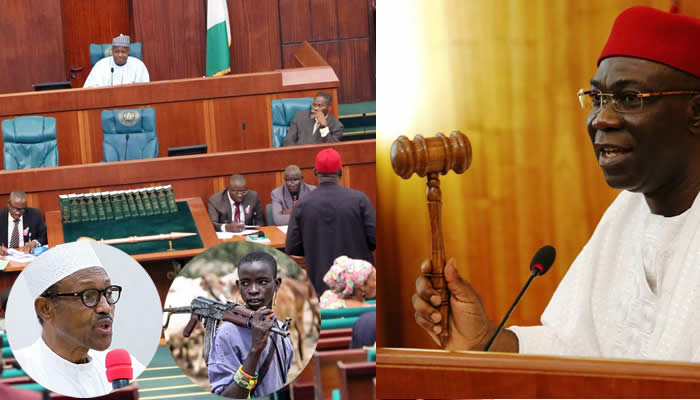 The Deputy President of the Senate, Ike Ekweremadu, has said the National Assembly may be shut to help President Muhammadu Buhari administration find an end to the spate of killings by herdsmen and militias across the country.

The upper chamber of the National Assembly also noted that the campaign by the Federal Government for more foreign direct investments in the country would fail if the spate of insecurity persisted.

Ekweremadu, who presided over the plenary on Tuesday, spoke while ruling on a motion moved by Senator Suleiman Adokwe (Nasarawa-South) over the continued killings in his senatorial district.

Adokwe said, “Throughout the weekend to this moment, herdsmen have unleashed mayhem on the people of my senatorial district, leaving many dead bodies, numerous injured persons and hundreds of thousands of internally displaced persons.

“The victims are largely the Tiv speaking ethnic nationalities, with a reported dead toll of 32 persons, and we are still counting.”

The senator described the attacks as “a well -coordinated and simultaneous carnage” across Awe, Obi, Keana and Doma Local Government areas of the southern senatorial district.

“The tragedy is that for four days running, this mayhem has continued unhindered, unchecked, unstopped by any arm of the law and security enforcement agencies.

Video: J. Alexander Keung, one of the ex-cops charged with George…

“Indeed, right under the nose of the armed forces and the police, this killing is sustained by sheer negligence or refusal to act by the security agencies. It is very sad that in Nigeria, with all the security forces, a whole senatorial district will go on being punished by militia and no action coming from government,” Adokwe said.

Making reference to the recent call by a former Chief of Army Staff and ex-Minister of Defence, Lt-Gen. Theophilus Danjuma (retd.), that Nigerians should defend themselves against killers, the lawmaker said the call was right.

He said, “It is no wonder that very eminent Nigerian citizens have urged Nigerians to defend themselves because their security is in their own hands and no longer in the hands of the Nigerian security forces.

“I am very emotional on this matter and I am not one given to emotion very easily. But what I have gone through this weekend is very horrifying; it is very distressing and sad. It is as if we are in a lawless society where life is brutish; where there is absence of state powers. We call on the Federal Government to stop this carnage.”

Several senators who spoke on the killings decried that Buhari, as the Commander-in-Chief of the Armed Forces, had not done enough to end the attacks. Some of them also accused the security agencies of negligence and bias.

After the debate on the motion, which lasted about one hour, Ekweremadu stated that there was the need for the legislature to do more in seeking an end to the killings.

He pointed out that the National Assembly could not exist without the people who the members are representing. He also said there would be no election if the electorate had been killed.

Ekweremadu said, “If we have nobody to represent, nobody will have a job here. So, security is more important than any other thing that we do here.

“If it gets to a level where we have to shut down this National Assembly and sit down with the executive for as long as it lasts to resolve the problem, we will have to do that.”

The Deputy Senate President said the chamber deliberately gave the matter the attention and priority it deserved through the debate.

He said, “As we have pointed out, the primary purpose of government anywhere in the world is the preservation of the lives of citizens.”

The Deputy Senate President pointed out that such trends would not have lasted in a country like South Africa. He said Nigeria should seek help from other countries if it had been overwhelmed by the security challenge.

He said, “I ask myself: assuming this is happening in America, in the United Kingdom or France, will it take all this time to be resolved? Not even in South Africa. But it appears that we are taking too many things for granted. The time has come for us to seek help from other countries. We should not be ashamed to ask for help.”

In his contribution, Senator Barnabas Gemade backed Danjuma on his self-help call, alleging that there was an ongoing cleansing of his ethnic group, Tiv.

He said, “This country is becoming a state without control. It is a state in which we have seen ethnic cleansing.

“It is a shame that a sitting government could watch criminality go to the level that we have seen it today. Rather than rise up and take very decisive steps against it, we embark on denials and shield this evil by just explaining, with flimsy excuses, that these are communal clashes between communities.

“The carnage in Nasarawa-South affects mainly people of my ethnic group, who are in large population in Nasarawa-South. It is the same kind of killing that is going on in the Goma, Logo and Gwer West local government areas of Benue State. And it is the same kind of killing we are witnessing in Wukari and Takum LGAs. It is targeted at a particular ethnic nationality – my own people.

“I don’t understand why responsible people elected to control the government of Nigeria will simply turn away from the reality of this matter.

“Yet, there are people who are armed and are killing people as they like. And the Inspector-General of Police would fly by helicopter to a town, land in the market square and be asking people whether there was any militia in the town or not. And nobody seems to caution anybody. This is very sad. We have done enough of a minute silence for innocent Nigerians being killed.”