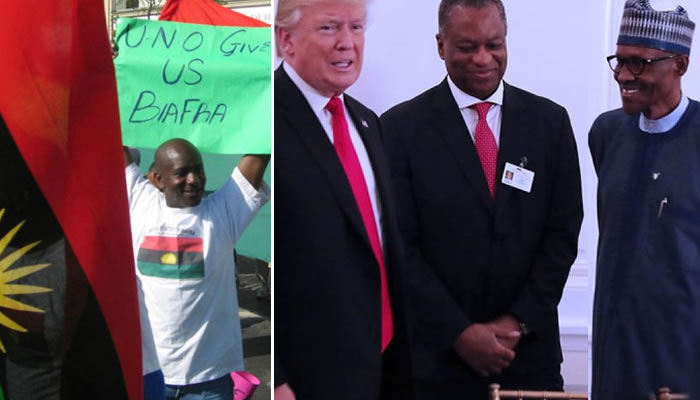 The Indigenous People of Biafra has called on President Donald Trump of America who is scheduled to meet President Muhammadu Buhari on Monday to pressure him(Buhari) to release their members in various detention facilities, who were hauled in for celebrating his inauguration.

IPOB said that it views the invitation of President Buhari to the US as a slap on democracy, especially as his actions since coming to power in 2015 has shown his aversion for democracy.

Speaking through its media and publicity secretary, Mr Emma Powerful, in a press release issued to newsmen in Awka, the group faulted the US embassy in Nigeria, blaming it for not transmitting to President Trump the incessant killings going on in Nigeria under Buhari.

Part of the release reads, “We would like to seize this opportunity of a meeting between President Trump and ‘Buhari’ to draw the attention of the American people to the plight of Biafrans in detention across Nigeria especially the four that are still in detention in a maximum security prison simply because they came out to celebrate with millions of other people around the world the day Trump was sworn into office.

“It is also important that we remind the US presidency, since it appears the US embassy in Nigeria failed to do so, the enormity of the brutality and cold blooded massacre of innocent citizens merely exercising their right to freedom of assembly on that fateful day of January 20, 2017.”

The group said there is something morally repugnant about Buhari visiting Washington to discuss democracy when his administration is anything but democratic.

It said the failure of United States government to hold this regime to account is what may have emboldened and encouraged them to embark on the wholesale ethnic cleansing of parts of Benue State.

It added that, “IPOB would like to know if President Trump, by virtue of this invitation to Buhari, is justifying the cold blooded massacre and illegal detention of tens of innocent Biafrans that rallied in Igweocha (Port Harcourt) on that fateful day of January 20, 2017 during his inauguration.

“What the Trump administration appear to be doing is inadvertently giving the green light to brutal anti-democratic regimes in Africa of which the ‘Buhari’ APC is one, to murder and detain at will. There is nothing democratic about ‘Buhari’ to justify his invitation to the White House.

“Whoever it is at the United States embassy in Abuja, responsible for compiling and transmitting reports of regime atrocities back to the State Department in Washington, failed woefully in his or her duty, because this current ‘Buhari’ regime is the worst government in the history of Nigeria. Both in terms of brutality, wickedness and total disregard for democratic norms and rule of law. There is nothing about this ‘Buhari’ regime that qualifies it to be given the honour of visiting the office of the leader of the free world.

The group said welcoming Buhari to the White House means welcoming tyranny into the bowel of democracy, and sends out the message that United States of America is standing shoulder to shoulder with a mass murderer and tyrant, contrary to its stated objectives.

“What those who are behind this visit of ‘Buhari’ to the White House may have succeeded in doing is give the official Trump administration endorsement to ‘Buhari’ to go on killing and locking people up at will, including those that came out on the streets to celebrate President Trump’s victory.

“It makes a mockery of the ideals, values and founding principles of the United States of America that the man responsible for the illegal detention and brutal murder of those celebrating the election of a US president is being welcomed to White House as if nothing happened.

“Does it mean President Trump is not aware of the 20th of January 2017 massacre at Port Harcourt or the US mission to Nigeria, especially the US ambassador, failed to inform the president.?

It listed Ikenna Igwe, Uchenna Innocent, Bright Sunday Okoro and Chidinma Godwin Nwafor as those still languishing in prison for no other reason than the fact that they were celebrating Trump’s victory.
Ends.