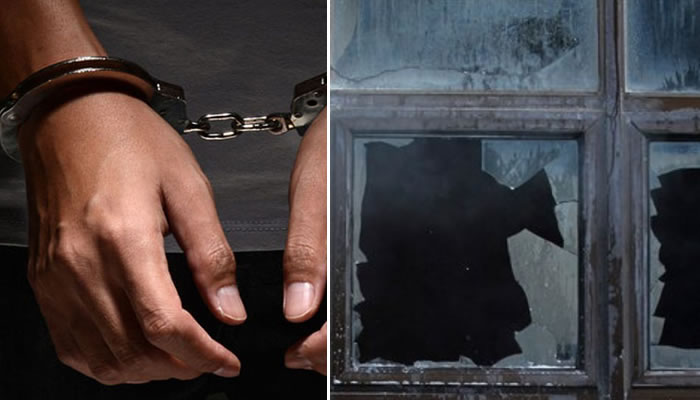 Man sentenced to life imprisonment in Ekiti for raping stabs self, attacks others in Court premises

There was tension in Ekiti State High Court on Friday after one Ajewole Dada Fulani stabbed himself following his sentence to life imprisonment for rape.

Ajewole, 24, was standing trial for robbing, kidnapping and raping of two female students of the College of Education, Ikere-Ekiti on 7th November, 2015 along Ikere-Igbara Odo Road.

The verdict was handed down by Justice John Adeyeye who held that the prosecution had proved the case beyond reasonable doubt.

The convict became emotional, furious and restless after the judgment was interpreted to him by the court registrar.

Ajewole, thereafter, hit the court window and broke the louvers and stabbed himself with it and attempted to stab other people inside the courtroom.

It then took the intervention of security personnel who grabbed the convict from wounding more people inside the court.

He was subsequently handcuffed and bundled into a waiting Black Maria. Court workers, litigants and other observers were shocked by the convict’s bravado.

Ajewole, on the day of the incident, conveyed the two college students in his commercial vehicle but diverted the vehicle to the bush, tied them to a tree and raped them one after the other.

The victims later escaped from the scene and reported the incident at the Ikere Main Police Station along College Road.

Ajewole was first arraigned at an Ado-Ekiti Magistrate’s Court but the case was transferred to the High Court after an advice from the office of Director of Public Prosecutions (DPP).

He appeared for the first time at the High Court on 16th November, 2016.

To prove the case, the DPP, Mr. Gbemiga Adaramola, called four witnesses and tendered exhibits which included the accused’s statement and a vehicle with registration number EMR 218 XA.

The accused called two witnesses to support his denial of the offence.

The court after listening to the oral argument of Adaramola and defence counsel, Mr. Sunday Ochayi ruled thus: “The prosecution has not proved the essential ingredients of the offence of robbery against the accused.

“In conclusion and for the avoidance of doubt, the accused was found guilty of the offences of kidnapping and rape as charged in Counts 1,2
and 3 and he is accordingly convicted to life imprisonment.”