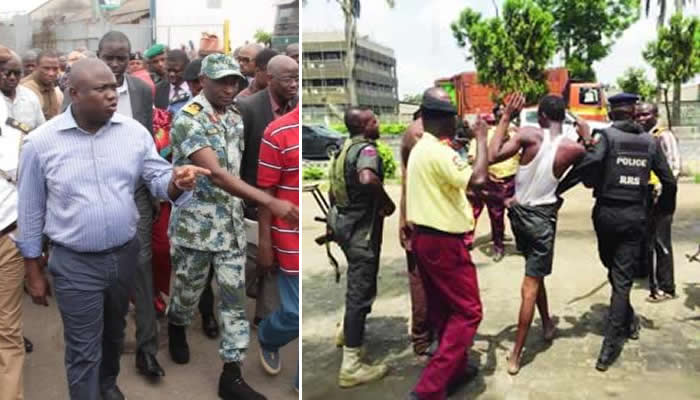 Gov Ambode stuck in traffic, witnesses clash between LASTMA and 7UP officials

Chaos broke out on Saturday at the 7UP end of the Mobolaji Johnson Avenue in Alausa, Ikeja, as officials of the Lagos State Traffic Management Authority reportedly clashed with some workers of the Seven-Up Bottling Company Plc.

It was learnt that in the fight, two LASTMA officials were injured and taken in an ambulance to a hospital. Three workers of the bottling company were also reportedly arrested.

Our correspondent gathered that some trucks belonging to the bottling company had obstructed free flow of traffic.

The state Governor, Akinwunmi Ambode, who was among those held in the ensuing jam around 11am, reportedly ordered traffic officials to clear the road.

A source, who witnessed the incident, said the governor’s convoy later took an alternative route as movement was at a standstill.

He said, “Everywhere was blocked. The governor’s convoy was forced to look for an alternative road. I later saw a LASTMA official being rushed into an ambulance. He was covered in blood.

“I saw a policeman and asked the cause of the chaos and he explained that some guys blocked the road and the governor ordered LASTMA officials to drive them away from the road. However, in the course of doing that, one of the LASTMA officials was stabbed.”

A video of the clash obtained by newsmen showed the moment some operatives of the Rapid Response Squad arrested one of the suspects.

When contacted, the Public Affairs Officer of LASTMA, Mahmud Hassan, confirmed the clash between the 7UP workers and traffic officials.

He said the management of the bottling company had been warned many times against blocking the road with trucks, adding that the warnings were ignored.

He said, “Workers at the 7UP plant at the old Toll Gate are fond of obstructing free flow of traffic by parking vehicles on that major road that linked the old Toll Gate to the Secretariat Road. We have had meetings with them and warned them, but they failed to heed the warning.

“Yesterday (Saturday), they did the same thing and four of their trucks were impounded. We had initially instructed them to move the trucks, but they refused and said their vehicles would not leave the road until they finished whatever they were doing. That was when we towed away the trucks.

“In the process of doing that, they launched an attack on our officials and our vehicles. They destroyed some of our vehicles and injured our officers who went for the operation. Nobody was stabbed. While one of our workers was dragged on the tarred road, the other was beaten to a pulp. In the end, three of their workers were arrested.”

Hassan said the governor’s involvement was coincidental, adding that he usually passed the road when transiting from his office to his house on the Lagos Island.

He warned that the agency would not spare anyone who attacked traffic officials while on their lawful duties, adding that the suspects would be arraigned on Monday (today).

He said, “There was a truck obstructing free flow of traffic in the 7UP area and the LASTMA men went to clear the road. In the process, the driver of the truck fought them and broke the windscreen and other parts of their vehicle. The police came into the matter and arrested the driver, who will be charged to court for malicious damage and obstruction of traffic. Also, the truck has been impounded by the police.”

The Managing Director of Seven-Up Bottling Company, Ziad Maalouf, did not pick his calls and had yet to respond to a text message sent by our correspondent as of press time.

The mobile phone of the general manager of the company’s Ikeja office rang out and he did not respond to a text message as of the time of filing this report.