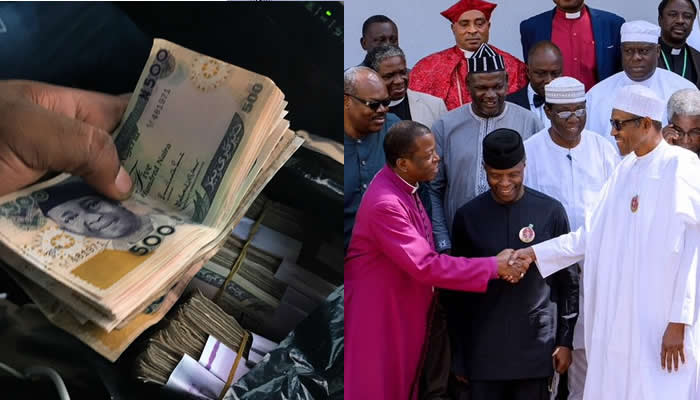 CAN leaders fight over N40million cash gift from President Buhari’s

According to Vanguard, the crux of the matter is a cash gift from president Buhari to the body in November.

The leadership of the religious body led by its president, Samson Ayokunle, paid a courtesy visit to President Buhari on November 10th last year and after the visit, they were given a cash gift as ”transportation money”.

In the memo, titled ‘NCEF Protests: Is NEC of CAN Guilty of Negligence?’, signed by Solomon Asemota, on behalf of some members, the NCEF, called the national executive council (NEC) of CAN to immediately convene an emergency meeting to investigate their accusation.

“On the 10th of November, 2017, a delegation of CAN, led by the President of CAN, Rev. Dr. Ayokunle, met with President Muhammadu Buhari and, after the visit, collected ‘transportation’ money. While informed sources claim it was N40 million, CAN officials insist it was N25 million and it was alleged to have been shared by somebody who is not an official of the national secretariat of CAN. NCEF insists on proper investigation of how the money was shared and how much each person received. In addition, NCEF insists on proper sanction of every Christian leader that took part in sharing money from President Buhari. It is unethical and very insensitive for Christian leaders to collect money from the man every Christian is aware has compromised security to the detriment of the church.” the memo read

The Forum also called for the investigation of allegations of “high-handedness” leveled against Ayokunle amd also a probe into vehicles purchased at “questionable prices” by the CAN leaders.

When he was asked to react to the allegations, Ayokunle described them as “a catalogue of lies” designed to smear his reputation.