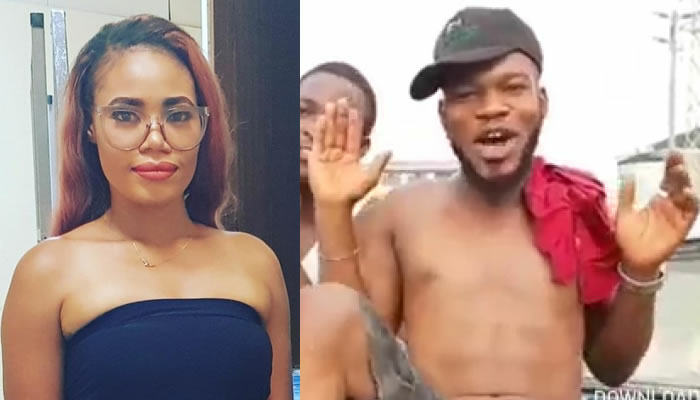 Sophia who admitted that she enjoys the working relationship between the duo says they are not dating and she has a huge respect for Broda Shaggi. Read excerpts from her interview below.

I am from Isoko North in Delta State. While growing up, I didn’t have many friends and I kept to myself a lot. Being the first of five children, my mother made sure I conducted myself properly as a child. Anytime I went astray, she didn’t fail to use the cane on me. Now, I understand that she was tough on me for my own good. Then, I thought my mother was wicked and too harsh. Inasmuch as I wouldn’t say growing up was fun, it was still memorable. However, I feel bad at times that I didn’t get to experience a lot of things many kids of my age did. My father is the calm one as he barely raised his hands on us while growing up. Our parents made sure we didn’t joke with our studies and church. We had no spare time to have fun.

Before proceeding to Serious Student Secondary School International, I went to Navy Town Primary School. Both schools were situated close to my house at Satellite Town, Ojo, Lagos. For my university education, I studied Theatre Arts at the Delta State University, Abraka. University life was fun because I was able to socialise and meet people from different backgrounds.

From the outset, my parents have been very supportive. They allowed us to pursue our dreams, provided we do not go against the will of God.

I like acting and I feel fulfilled doing it. Like I said earlier, I studied Theatre Arts; so, I was already into comedy in school. I was just waiting for an opportunity when I met Broda Shaggi (Samuel Perry). Meeting Broda Shaggi was a major turning point in my career. I had so many plans in my head but I didn’t know how to execute them. When I met him, he showed me the way. Before we started the comedy skits on Instagram, I wanted to start my radio drama series. I still have that in mind though.

Comedy for me has been very lucrative. I can’t speak in exact terms right now because I believe there is more to come financially. But I have been able to pay a lot of bills with comedy. I’m also an actress, model, and dancer. If comedy had not worked out for me, I would still remain an actress. All I do is entertainment; I am trying to spread my wings around the entertainment industry.

I don’t think it is my calling; we all have our strengths and weaknesses. It takes more than doing comedy skits to do standup comedy. Standup comedy is a different ball game.

I don’t think Broda Shaggi takes all the shine. I have my own time to showcase and he has his time too. We do different things; I am the reporter who always comes up with questions for him to answer. Broda Shaggi is highly talented and I respect him for that. I don’t plan to stop working with Broda Shaggi anytime soon because I enjoy every bit of what we do together. The feedback we get from people is amazing and I am thankful to God for the opportunity.  But what I am doing now doesn’t stop me from doing other things and I plan to do other things.

I am not in a relationship with Broda Shaggy. We are good friends; we share the same vision and we complement each other.

I love simplicity a lot, even when I am combining different colours. The simple look is my style.

I don’t really have a specific time set aside to relax. Relaxation for me comes in between my working hours. I could be in the middle of something and I would just take a break to listen to songs, check things or see a movie on my phone.