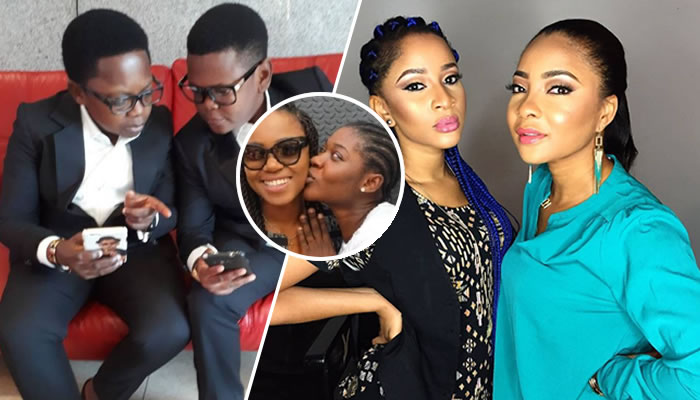 With the high rate of controversies in the entertainment industry, we still have friends that serve friendship goals all day long. These are 10 Celebrities Best Friends In The Nigerian Entertainment Industry

These friends share a kind of bond that will give you butterflies in your tummy. With the way they support each other, you might be forced to set your best friend standards.

Some stars don’t really like keeping the other celebrities as their close friends as they are just fine with having working relationships with them.

However some Nigerian celebrities have managed to maintain extremely close friendship for a long time and these are few who are best of friends.

After Kate fell apart with her erstwhile best friend, Genevieve Nnaji, she became close to Rita. Rita has often been regarded as the most friendly Celeb in Nigeria as she has been able to maintain cordial relationships with many celebrities.

Two of Nigeria’s leading female vocalists, Waje and Omawumi, are known to be best friends as they melt our hearts with their endearing friendship.

After Alex fell apart with Uti, his erstwhile best friend, he became very close to Ik Ogbonna. The duo grace events together these days unlike before that he used to attend events with his former best friend Uti.

Edo state born Adesua Etomi and Abia State born, Linda Ejiofor are two delectable actresses being seen almost everywhere together, they fool around together, attend events and shows as a pair and even in movie sets.

The 3 Nollywood divas, Rukky Sanda, Ebube Nwagbo and Oge Okoye always hang out together and have grown even more fond of one another over the years.

Mercy Johnson is known to have massive love for Yvonne Nelson as the two are close friends. According to Yvonne, she wasn’t surprised she was chosen to be Mercy’s bridesmaid because they both had a long-standing relationship as friends.

Mercy Aigbe and Mide Funmi-Martins are best pals, as a matter of fact of fact they are sisters from different mums – yeah they are that close. They feature in each other’s movies, attend functions together, support each other through thick and thin.

They are like Siamese twins. They appear inseparable. They have been friends ever since their paths crossed. They r like brothers. No wonder Osita served as Chinedu’s best man on his wedding day few years back.

Super stars and BFFs, Genevieve and Oluchi have a friendship that clearly runs deep. They started from Surulere yars ago and now they have a stronger bond than ever.

From their vacation at the Banyan Tree Mayakoba luxury resort in Mexico, to bonding at Inagbe Grand Resorts & Leisure Lake, Snake Island, Lagos, these two queens have shown fans that they are sisters, besties and more.

Top Nigerian comedians, Basketmouth and Bovi are best of friends in the entertainment industry and this is not a secret to many people. In fact, they love to describe each other as brothers from different mothers, that is to show that what is between the two of them surpasses mere friendship.