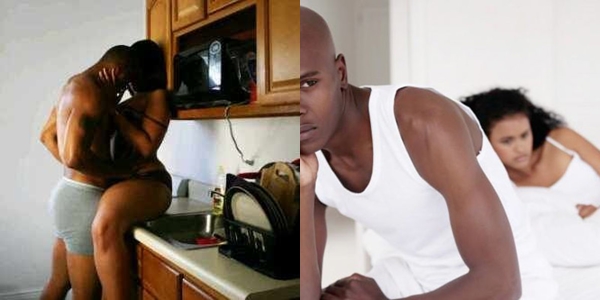 A young man reveals how he slept with his seductive step mother.

When a man marries a woman far too younger than his age, it call lead to to the woman having affair with a younger man

My name is James, a third-year student in the university studying Accountancy. My mum had left us, me and my twin sister Joyce with my father due to her untimely death. My mum fell sick and sadly, it claimed her life after fighting for a year and a half over kidney problem.

My dad flew her abroad just to save her but finally, she left us alone in this world. I thought I wasn’t going to survive my mum’s painful and sudden demise because I was too attached to her. When I got admission into the University, I decided to go from home due to the closeness with my mum.

Unfortunately, my twin sister got admitted into the University of Nigeria, Nsukka so we were miles apart. My twins and I were more of best friends than siblings. We shared our secrets and never hid anything from each other.

After my mum’s demise, she became my other mother. I was left alone with my father in Lagos and life was boring as hell. My dad suggested that I proceed to the campus because he noticed the loneliness and pain I was going through at home.

I moved into the campus and visits home whenever my twin sister is around. My father cared so much for us. He made sure we never lacked anything.

One day in school, a project came up that I had to use my allowance to solve, due to this occurrence, I had to visit home the next weekend to get a replacement from my dad and also see him. I arrived home in the afternoon and met my father’s absence.

When I got home, the house was lonely though Yisa, our gate man, told me that someone was home—it was a lady. I walked into the sitting where I was confronted by an epitome of beauty.

She introduced herself as Tessie, a friend of my dad. I headed to my room where my thought centered on Tessie’s curves. Damn! They were so obvious and succulent.

Yea, I have a girlfriend but not what I saw out there. Immediately, there was this rush of anger and hate I felt towards my dad for bringing a lady into our home.

I felt if he must take a wife, why not someone close to his age? Why will he bring this very young woman home? I felt handicapped because it seemed my dad had already made up his mind.

Tessie was super sexy, big curves both front and back. Her breasts were always pointing directly at my face. At this point, the thought of Tessie never left my subconscious ever since I walked into our house that afternoon.

I became jealous of my dad all of a sudden. I was imagining how he made love to her. After the meal, I went back to my room.

The thoughts of my father’s wife never left my mind. The more I think of her, the more I get a hard on. One Sunday, I found myself alone in the house with Tessie.

The afternoon was hot. So I decided to have a quick bath. I rushed into the shower forgetting to close the door. Then I felt an uneasy touch of a feminine hand. She had been watching me and knew when I went into the bath. I turned back and couldn’t believe my eyes. Tessie, my father’s wife had quietly joined me in the bath, naked.

Out of fear and embarrassment, I ran out of the shower into my room and hurriedly wore my shorts. She came after me. I wanted to run out of the room. She blocked the way. I looked into her eyes and could not resist. We began to kiss. She pulled my boxer and gave me a hard suck, my head exploded.

I could not hold it any longer, I had to give in to this devilish attraction. I bent her over my reading table and we made love.

She kept screaming and I continued pushing in harder for over an hour. I had this rush of strength that made me to last more than an hour inside her before I finally gave a very hot release inside her.

All those anger, pain, hate and the burden I felt before all melted away. I was free and happy once more. She stood up after the whole scenario and gave me a hot mouth-watering kiss of my lie.

Oh! She’s damn sweet both inside out. After dinner, I went back to my room feeling on top of the world and very tired. Few minutes later, she came knocking on my door begging or more.

I told her I was already exhausted. After she left, there is this rush of guilt I felt. What have I done? How do I look my dad in the face and tell him I love him while I’m heating on his supposedly wife.

I became helpless because I could not resist the attraction between Tessie and I. We continue with the affair under my father’s nose and whenever my dad is around, she behaves as if she can’t live a moment without my dad. I went back to school and now I am feeling terrible.

I want to end the affair but my dad’s wife would have none of it. She follows me everywhere I go, visits me in school begging for more. Now I am at the verge of being caught with my dad’s wife.

What do I do? How do I make this go away? I know I have been very irresponsible in my act but I seriously need help, I am in a deep fix.