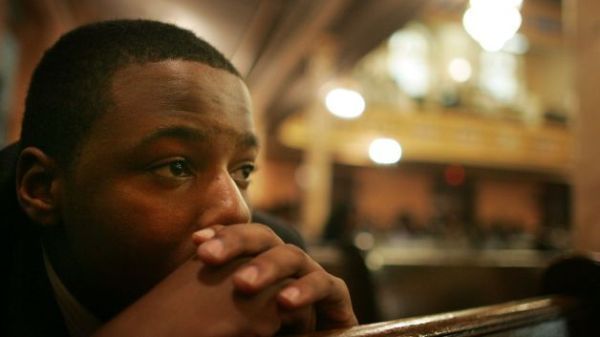 A married man has told the story of how his wife got deflowered right in his presence on their wedding day.

The man revealed that his wife refused to let him sleep with her while they were dating because she was a virgin. She asked him to wait till they were married and he agreed.

However, on their wedding day, some men forced their way into their home and r*ped his wife.

Now, he is having difficulties loving the woman. The man told his story in a letter he wrote to The Nation.

Below is how he told the story:

“I dated my girl for three years without s*x. For her, I decided to remain celibate because she wasn’t ready for it.

“After our Traditional marriage, she still refused and wouldn’t let me touch her at all.

“We however fixed our wedding date. On my bachelor’s eve, my friends were around with their girlfriends.

“I really wanted to have my woman to myself that night and I spoke to her about it but she turned me down as usual and begged me to wait a little longer. I agreed after all, we would be married soon.

“At last D-DAY finally came and I was waiting patiently for the wedding ceremony to be over.

“At 6pm, we were home relaxing. I called my wife and asked that we take a shower together, she said she was shy and cannot come. I didn’t force her.

“She however had her bath first and I had mine later. When I finished, I came out to meet my wife asleep.

“I joined her in bed, kissed her and she woke up. I’m not even sure she was really asleep. I started making advances because I really needed it. I had waited for too long.

“My beloved wife started crying and begging me to wait till nightfall, that she needed to get some rest and when she wakes up, I’ll do all I so desire to do with her. I couldn’t hold it anymore but I managed to control the urge.

“Around 9pm, we heard a knock on the door, and the person behind said he had come to drop a parcel sent to us by my mother.

“I went to get the door and I was shocked to see five armed men in mask.

“I begged them not to harm us. They asked for money but we had no money at home, after all we just got married.

“To cut the story short, these men took turns in r*ping my wife.

“She got disvirgin by the first right in front of me. Right in my own eyes.

“I couldn’t bear it. I cried as I watched those heartless men force themselves on my wife.

“They didn’t leave her until she was unconscious. After the entire tragedy, I called neighbours and we rushed her to the hospital.

“After two days, she regained consciousness. I made sure she was fine.

“But really guys, I cannot forget that day, My wife was disvirgined right in my presence.

“I can’t touch her no more, i don’t even crave for her anymore.

“I cannot live with her anymore. I want to file a divorce already. What would you advise me to do?”