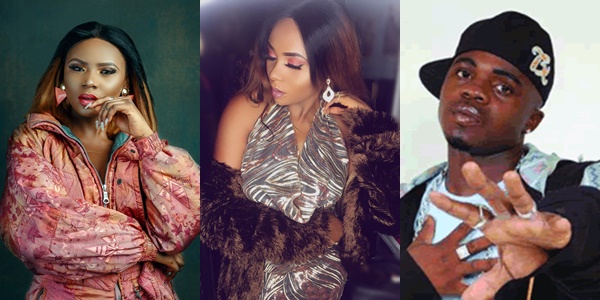 I Don’t Sound Like Olamide, Dagrin Inspired Me To Be A Rapper – Mz Kiss

Rapper Mz Kiss in a new interview with Sunday Scoop has shared a bit about herself and her music background.

According to the OWO META crooner, late rapper Dagrin inspired her to join the rap game.

Read excerpts from her interview;

I started rapping when I met my first producer, Soplain, in Bariga, Lagos. Bariga made me who I am today because the people there inspired me. I started dreaming of being a rapper when I heard the late Dagrin’s songs. I loved his style and I thought I could do it too and when I tried, it sounded good. I was later advised to stick to rap music since we already had many singers. Music is life for me; it is what I know how to do best.

My father died in 2002 but my mother has been supportive and she is happy with what I do. My mum used to say she wanted me to be like Beyoncé; so, it wasn’t a big deal when I said I wanted to be a musician. She supported me with prayers and the little money she had. I am now living the dream of my mother.

I am signed to Capital Hill, a record company owned by Clarence Peters. However, I am still not satisfied with where I am; I want more. Though the love has been overwhelming, I don’t want to get too comfortable.

If comparing me with Olamide brings money to my pocket, it is okay and I have no problem with that. At the moment, I am after making good music and getting it across to people. Olamide is my colleague and I am a fan too. Though he lived in Bariga, Lagos, at some point too, our paths didn’t cross. Though I am aware that people compare me with Olamide but I don’t think I sound like him. I am myself and my style is unique to me.

I recently released a song in which I featured Slimcase. It is titled Merule. The song is currently getting massive airplay; so, I’m working on the video. I am also working on building my brand image as well as releasing an album.

I sew! If I had not pursued a career in music, I would have been a fashion designer or a presenter. While growing up, I wanted to be a doctor or lawyer as I didn’t know other professions. Right now, I am just after my music. I am giving everything to music and ready to take it all the way.

I have been through a lot. Though I have been lucky, the biggest challenge an artiste could face is getting people to believe in him or her. Making people familiar with your music is hard. At times, you would spend a lot of resources without achieving anything.

I don’t like people who tell lies. Even though everybody lies at some point, it should not be gross. I also don’t like body odour.

I don’t have regrets. But I always felt I would have grown bigger in the music industry if I had started singing professionally at a tender age.

While growing up, I admired Beyoncé and wanted to be like her. As a matter of fact, she is still my role model because she is full of energy. I also listen to Lil Wayne; he is crazy about pop. I listen to a bit of J. Cole, Kanye West and Drake too.

He must be humble, understanding and good looking. He must love what I do because I love what I do. Also, he must appreciate me and have a good sense of humour because I am very energetic.