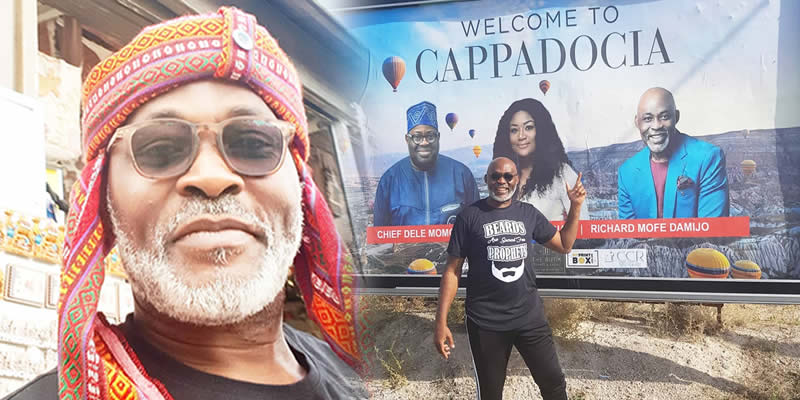 Nollywood star Richard Mofe Damijo popularly called RMD is one celebrity who is very respected. He is not just popular as an actor who dazzles Nigerians with the beautiful rendering of his roles, he is also celebrated as a politician in his own capacity.

It would, however, appear that his fame has gone beyond him and has spread to other shores in the world. The illustrious actor recently visited Turkey and he was surprised by the warm reception he received.

The way he was respectfully welcomed by the Turkish people has caused him to gush on his Instagram page. RMD who went on the trip to far away Turkey with another important personality Dele Momodu shared a picture of a billboard the Turkish hosts had erected in their honour.

On the board, the pictures of Richard, Dele and another lady were obviously displayed.

Then the words “Welcome to Cappadocia“ did the work of offering them a place within the city.

Evidently, Richard was swooned by the welcome so much that he expressed his excitement by calling out his mother to see that he was both famous and fulfilled.

“Oh wow Mommy see i made it. I am famous. There is actually a bill board welcoming me and my friends to the amazingly formed city of Capadocia. Yet my hosts say this is just the beginning of many surprises to come in this holy city in Turkey. My Turkish diary starts now.”

The talented actor who recently won an award also took to telling his absent mom and his fans that his hosts promised him that there was more to come.

Following this, RMD took to sharing other pictures of himself enjoying and living his best life in Turkey. In a video, he showed the breathtaking sight of a summit in the beautiful city. The view which took his breath away made him to talk about the creative power of God.

In yet another hilarious video, the actor and politician revealed the humourous workings of buying and selling in Turkey. While trying to trade his money for a single cone of ice-cream, RMD was thoroughly humoured by the person rendering him the service.

In Cappadocia you need more than money to get Ice cream. More than anything else you need a sense of humour… @thebutiktravel @aydinademyildirim #cappadocia #Kapadokya #Turkiye #Turkey #rmddiary #rmdtravels #RMDIsMrX #Rmdsaysso

Indeed, the “Turkish diary” of Richard, the latest ‘Sultan king’, is teaching his fans quite a lot, and even more, it is showing the world is a beautiful place to live in.

Meanwhile, Legit.ng recently shared a story about Richard Mofe Damijo visiting Scotland and wearing the traditional kilt. He was not alone, rather, he was with the Mavin Record boss Don Jazzy. You may also like; Actress Omotola honoured by the United Nations as one of the most influential people from Africa