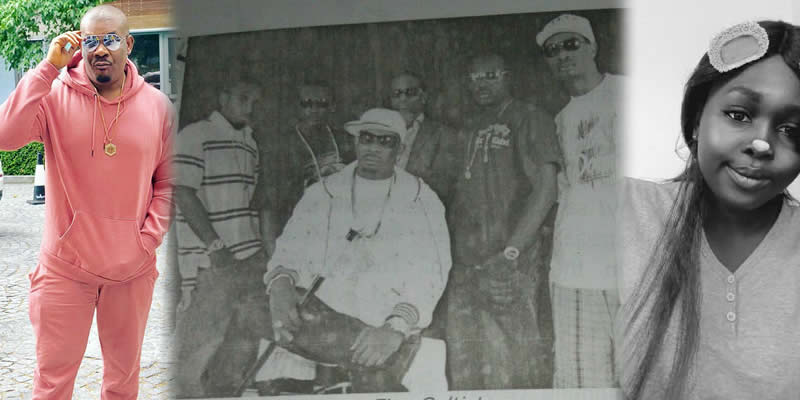 Nigerians had a lot to say about the obviously misleading photo

It’s not enough that Nigerian history as most know it has been rewritten to suit a certain agenda many believe is being taught in school these days. Just recently, many social media users were left in shock when a photo off the page of a Nigerian textbook surfaced online.

The photo was shared by Twitter user identified as Nu_Chella, where defunct, one-time huge Nigerian singing group, Mohits were portrayed as cultists. The throwback photo of the group was plastered on a page in the textbook with the author describing Don Jazzy, Wande Coal, D’banj, D Prince and the rest of the members as cultists.

Although a bit hilarious, the libelous nature of such depiction of entertainers is appalling. Many social media users didn’t hesitate to express their disappointment in such misleading photo that is now being ingested by unsuspecting students across the country.

So my little sister saw this in her text book and asked me if Donjazzy and Wande coal are/were cultists. It’s either she wouldn’t believe text books or… pic.twitter.com/VK3SFUNdxj

Ordinarily, the photo went viral, giving that the said ‘cultists’ have played a major role in paving the way for many young musicians in Nigeria.

Although none of the singing group have said anything about it, most Nigerians share the view that the author of the textbook should be found and sued.

Here are some reactions of Nigerians below:

This is totally wrong. Both the author and publisher ought to be sued for this nonsense.

Whoever produced this nonsense book should be sued

Whoever produced this nonsense book should be sued

As celebrities popular amongst a growing generation, it would be very wrong of Don Jazzy and Co to ignore this matter.

Text books these days are nothing to write again. How can they say head is for carrying loads, and showing a sexual scene in a textbook. The educational body that is meant to assess these books has collapsed big time