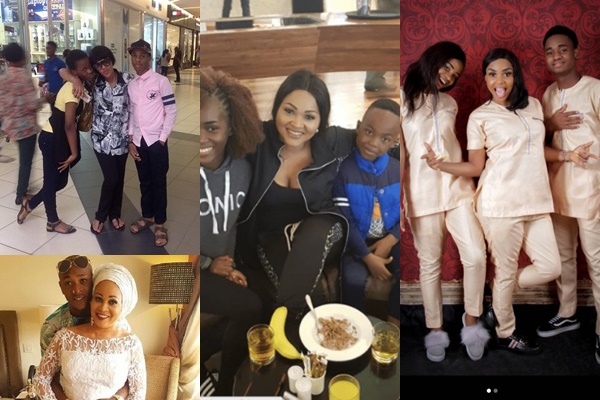 The Nollywood industry has quite a number of single mothers who are playing the roles of mother and father and doing an excellent job of it.

These women have beautiful and strong children to show for their struggles.

Some of them were once in abusive marriages while some came from relationships that just didn’t work out.

Marriage or relationship, these are mothers who can proudly show off their offsprings today.

The charming and radiant Bukky’s marital life has been a subject of controversy. Bukky who was born in Ogun state Nigeria in they year 1967 blessed with two kids out of marriage and choose to enjoy her life as a single mother and nollywood actress.
She has two sons, Eniola and Gbenga. She became a grandmother when one of her sons had a child.

The popular radiant Yoruba actress became single mother when the the line drawn-out with the veteran nollywood actor and ex husband Saidi Balogun.
The 48years old single mother enjoying her life with two kids and she changed to her maiden name Fathia William in 2015. She’s an actress, a producer and entrepreneur.

The radiant and charming Bisi Ibidapo-obe (Popular Known
asOmologbalogba, born January 27, 1977 in Surulere, Lagos) is a Nigerian actress. She became famous for her role in Bisi Omologbalogba. She owns B.I.O Lingere, an adult shop in Lagos.
She claimed to have a child with one Nigeria senator Dino Melaye when their marriage failed. She’s happy as a single mother.

The gorgeous Lola Alao is an actress, known for Onilara(2008), Òkú tee sin (2004) and Dokita Alabere (2006).
The single mother have a daughter of a short marriage with a US based dude, the marriage not last.

Toping the list is Nollywood actress Iyabo Ojo, a mother of two teenage children Festus and Priscilla Ojo. Iyabo is super proud of her achievements as a mother and she never stops showing us the reward for her struggles and labour: her two children FesPris. She even named her enterprise after her children

Adunni Ade was in a long term relationship and her two handsome sons were as a result of this. It is widely known that the actress adores her boys.

Her son Raheem brought about so much controversy when he was born but asides that, the lovely actress is a great mother.

The look alike daughter of celebrity actress, Tayo Odueke is 20 years old and her mother has single-handedly raised her and we can say she is doing a great job.

The actress was once in an abusive relationship that left her with the status of a single parent. Omobutty as she is fondly called is a proud mother of two children. The actress might have had rough times in the beginning, but today she has her children to give her some solace.

The light skinned actress separated from her husband last year after he brutally assaulted her. She is a mother of two beautiful kids.