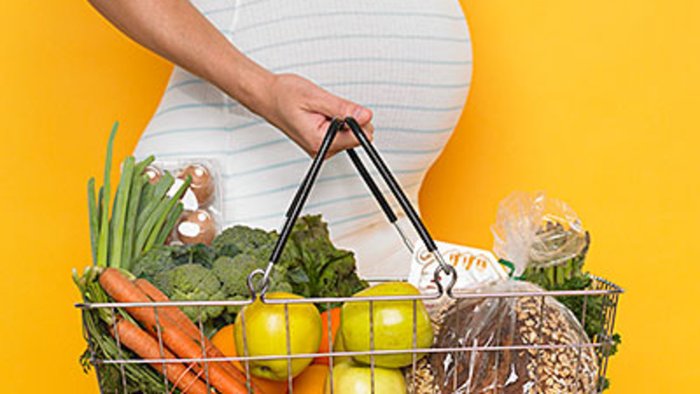 When you’re pregnant, there are a lot of new things to think about, especially when it comes to healthy eating. You may need to drop some long-established eating habits and learn how to walk a fine balance between getting enough nutrition for your baby, and avoiding foods that can harm the both of you. Here are 10 foods that you need to be cautious about eating while you’re expecting.

Pregnant women should aim to get three to four daily servings of dairy. It’s packed with calcium, protein, and vitamin D to help build your baby’s developing bones, teeth, heart, and nerves. But there is one caveat: not all dairy products are safe to eat when you’ve got a bun in the oven. “Avoid raw milk and other raw dairy products,” says Sarah Krieger, RDN, a registered dietitian who specializes in maternal and prenatal nutrition. Check the label to see if your milk and cheese has been pasteurized. “[The process] kills bacteria, which can be harmful if consumed,” she says. Certain varieties of soft cheese are considered risky, such as Brie, Camembert, blue cheese, and feta. These are often (but not always) unpasteurized, and can carry Listeria, a germ that can cause miscarriages.

For a quick-and-easy meal on the go, sandwiches are an excellent choice for most people. But if you’re pregnant, you will want to take a closer look at the ingredient list. Because of the risk of Listeria, you will need to avoid deli meats such as ham, turkey, chicken, bologna, and salami. “It’s the only bacteria that continues to grow at chilled temperatures,” says Krieger. “Most healthy adults don’t react to it, but it definitely is risky for pregnancy.” There is a silver lining, though. You should be able to find prepackaged, pasteurized lunchmeats at the supermarket. You can also use processed meats when you prepare your own food at home. “They need to be heated to 165 degrees to kill the pathogen Listeria,” says Krieger.

Salads are often prepared with fresh fruits and vegetables, making them one of the healthiest meals you can eat—so you may be surprised to learn that you will need to avoid salad bars and prepared salads at delis and cafeterias. “There are several concerns here,” says Krieger. “Has the temperature been consistently less than 40 degrees? Has the food been sitting out for less than two hours? And is there any unpasteurized cheese in the food?” If the answer is yes to any of these, the food may have been exposed to Salmonella, Listeria, or E. Coli. It’s much safer to prepare your own salads at home, after giving the leafy greens a thorough wash.

Drinking juice is a convenient way to pack more servings of fruit and vegetables into your diet. However, not all juices are safe, since they can harbor E. Coli or Listeria. These can endanger a developing baby. “Avoid freshly squeezed juices at fairs and farmer’s markets where it may be unknown how long a juice has been away from the fruit,” Krieger says. “But it’s okay to squeeze your own juice at home and consume it right away.” Packaged juices are also safe, as long as they have been pasteurized.

Say goodbye to rare steak and sushi while you’re pregnant. “Bacteria and other pathogens thrive in undercooked meat and seafood,” says Krieger, so expectant women need to take extra care that their meats are heated to a high enough temperature. “You will need to cook meat to at least 145 degrees and leftovers to at least 165 degrees.” If you’re a meat lover, grab a food thermometer and use this handy chart as a guide.

Eggs are an excellent source of protein, vitamins, and minerals. But if you’re pregnant, you’ll need to make sure that your eggs are cooked all the way through, with whites and yolks firm throughout. Surprising sources of raw eggs include homemade and fresh-made ice cream, mayonnaise, Caesar salad dressing, raw cookie dough, eggnog, and hollandaise sauce. (Store-bought is fine as long as you see “pasteurized” on the label.) “Salmonella is the bacterial risk here,” says Krieger. You will also want to check the sell-by date on any eggs you buy, and keep them refrigerated.

“Caffeine is a concern,” says Krieger. Consuming very high amounts has been linked to miscarriages, so you may want to cut down on coffee during pregnancy. But here’s good news: you don’t need to go cold turkey. Consuming up to 200 mg of caffeine per day is generally considered to be safe. This is equivalent to one to two cups of coffee. “However, some women may feel more sensitive to caffeine during pregnancy,” says Kreiger. If you do choose to indulge, you will need to keep track of other sneaky sources of caffeine, such as chocolate and energy drinks.

Pregnant women need to avoid high-mercury fish, since this chemical has a tendency to accumulate in the body. “It may cause damage to the nervous system,” says Krieger. Avoid shark, swordfish, tilefish, king mackerel, and canned albacore tuna, since these larger fish tend to contain more mercury. The good news is that you can stock up on high-quality protein and omega-3 fatty acids by limiting yourself to low-mercury fish. According to Krieger, safe choices include tilapia, salmon, shellfish, and canned light tuna.

Vitamin A is an essential nutrient for a baby’s embryonic growth, and it also helps with tissue repair after labor and delivery. Most women are able to get more than enough vitamin A from prenatal vitamins, as well as from the fruits and vegetables, meat, dairy, and eggs that a person would normally eat. Too much vitamin A, however, is bad for baby: “It may cause birth defects,” Krieger says. A serving of beef liver contains 431% of your recommended daily intake, so it’s best to avoid it after you give birth.

Most experts agree that women should avoid alcohol during pregnancy to prevent fetal alcohol syndrome (FAS). Some doctors say an occasional glass of wine is fine, but the CDC and the U.S. Surgeon General still advise against it. Though there’s no evidence that drinking a small amount of alcohol will harm a baby later in pregnancy (the most dangerous time to drink appears to be later in the first trimester), there’s also no evidence that it won’t hurt the baby. Krieger’s take: “Avoid all alcohol during all trimesters of pregnancy.”
CHECK THIS ALSO:

7 types of women who would likely cheat on their partners

Countries That Are So Small You Didn’t Know They Existed

Hope for cardiac patients: medical breakthrough of 3D-printed heart gets backed by…

7 ways to get rid of toxic substance from your body

How to Keep Your P3nis From Aging Poorly

Why Are Doctors Prescribing Fluconazole To Pregnant Women?