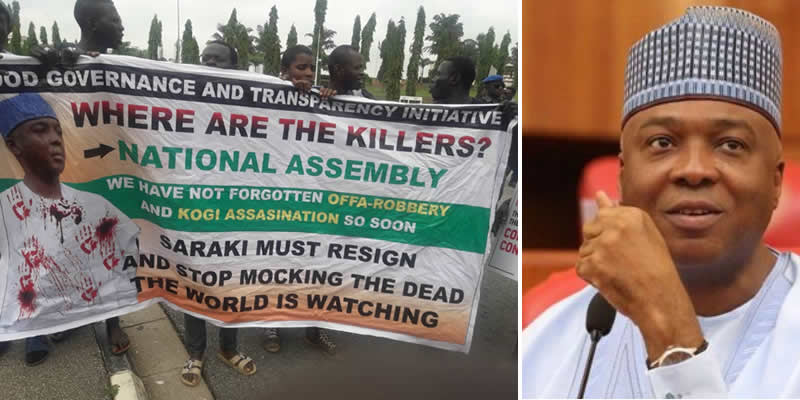 The Coalition for  Good Governance and Transparency in Nigeria led thousands of protesters this morning to occupy the National Assembly to demand the immediate resignation of the Senate President, Bukola Saraki over his alleged role in the Offa Robbery incident.

It could be recalled that the Inspector General of Police, Ibrahim Idris crack team recently whilst investigating suspects in the crime implicated the Senate President, Bukola Saraki whom they alleged to have been the major brain behind the funding of the crime.

The Coalition in their demands called for the resignation of the Senate President and his colleagues sponsoring political killings in the country and said it is impossible to have Saraki continue to preside over the hallowed chambers of the National Assembly at a time when there is global outrage over ethnic and politically masterminded killings in Nigeria.

The protesters carried various placards with inscriptions such as “where are the killers in the National Assembly, we have not forgotten Offa robbery incident and Kogi state assasination so soon”

“Saraki must resign and stop mocking the dead, the world is watching

“Stealing is corruption and padding is a crime against Nigerians”

Various leaders of the group took turn to speak at the event.

According to Comrade Solomon Adodo who led the protest, he said Bukola Saraki might be looking at every Nigerian like a fool but the Coalition has come out to take strong exceptions to his Machiavellian politics and send a clear signal to him that Nigerians have rejected his style of leadership and want him out.

Adodo said Saraki’s corruption trial with the Code of Conduct Tribunal, CCT, over his alleged non assets declaration was still ongoing in the anti-graft court and insisted that the path to honour for the Senate President was to step aside to clear his name.

He tasked members of the 8th Senate to do the needful by immediately impeaching Saraki as the Senate President should he fail to resign, saying such development would bring sanity and restore the lost glory to the upper chamber of the National Assembly in particular and Nigeria in general.