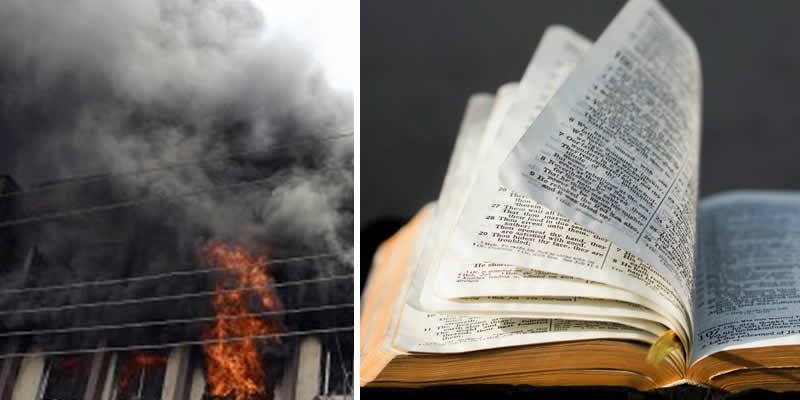 A 3 bedroomed bungalow at Ezioha Okporo in Orlu Local Government Area of Imo State, leaving only a Holy Bible in its parlour unaffected.

The landlord’s original company certificates, vehicles documents, his educational certificates, those belonging to his wife, and household items were all razed to ashes by the inferno.

Although there was no casualty, many found it curious that the Bible that was in the same parlour where many other items were razed was not burnt.

The cause of the fire had not been ascertained as of the time of filing the report but it was gathered that the building was estimated at N10m.

Speaking with Southern City News at the scene of the incident, the landlord, Mr Vincent Ihenetu, said all the household gadgets and other valuables were gutted by the fire.

He stated that the fire started in the morning hours when no one was around in the compound, adding that he and his family members were in the compound of one his relations for a child dedication when the distress calls came.

“We are in our relation’s compound when I received calls from my neighbours, who were already inside my compound quenching the fire, that my house was on fire. Before I could get to my compound, the building had been burnt down.

“It was the manual efforts of my neighbours, friends and well wishers that the fire did not extend to the two boys’ quarters, in the front and back of the building,” he added.

Ihenetu, who hails from Umuduruoha Amaigbo in Nwangele Local Government Area of the state, further stated that he bought the building when it was under construction in 2011 and completed it.

He also told our correspondent that he came back to the building on May 7, 2018 after his kidnap and releases in 2016.

“I came back last month to re-equip the house when I saw that other people had started building around the area to avert the lonely nature of the area, which I presumed led to my Sunday, November 27, 2016 kidnap”.

READ: Family of 6, including twins killed by generator fume in Edo State

Fielding questions, Ihenetu, who revealed that he was consulting with his pastors, said he was not suspecting anybody.

“There has not been any problem between any of my neighbours and my household since we came back and started living there. I have yielded to the will of God Almighty, who knows and sees all things,” he said.