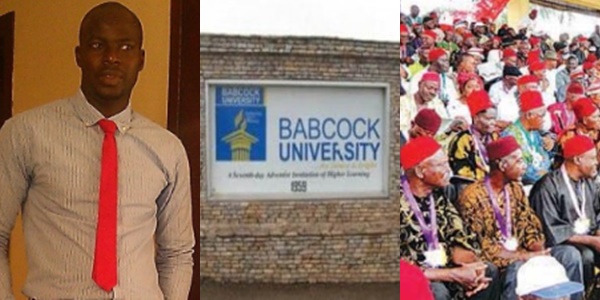 Babcock University has reacted to a viral post by a staffer who said all Igbos should have been wiped out during the Civil war.

See their statement below:

The attention of Babcock University has been drawn to a story titled”Babcock University staff goes on a rant; Says Igbos Should Have Been Wiped Out During the Biafran War”.
The story is credited to one Alaba Ajibola.

Babcock University’s pride is in its diversity of people and cultures. It is a global institution, and accommodates people, without bias, from every continent of the world.This confers upon the University its mark of uniqueness and identity as a global brand. The Institution celebrates the diversity of humanity because it gives a sense of beauty, and an acknowledgement of the power of God, the creator of all.

Babcock University values every and all persons irrespective of creed, culture, race, religion, and political persuasions.

The noble achievements of the University have been made possible by the the contributions of the exceptionally gifted and immensely great individuals from the different parts of this country, and those from other nations of the world, who have found joy working in the University.

Whereas Babcock University believes in freedom of expression, and places premium on autonomy and responsibility, it is never supportive and does not wish to accede to any divisive tendencies intentionally or unintentionally couched, and are capable of inflaming the embers of discord, or potentially devised to dismember the nation.

The University wishes to thank members of the public for their continued faith in the Institution, and for believing in it as socially responsible.

The University will continue to promote love, unity, excellence, integrity and accountability in all it does.

The Babcock University students’ intimate video that broke the internet