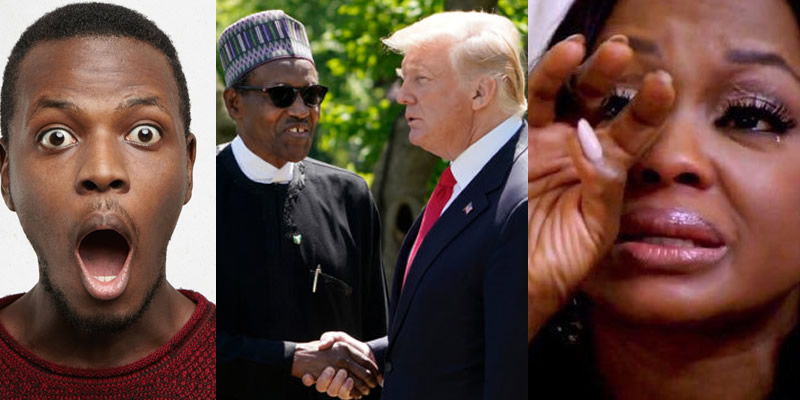 I never want to meet someone so lifeless again, Trump allegedly told aides after meeting Buhari.

Nigerians have expressed diverse opinions about a report in the Financial Times alleging that America’s President Donald Trump referred to President Muhammadu Buhari as ‘lifeless,’ after their meeting last April in the White House.

Buhari and Trump met at the White House on April 30. Both leaders discussed issues bordering on fighting terrorism and economic growth.

The paper added that Trump warned his aides that he never wanted to meet someone ‘so lifeless’ again.

“The first meeting with Nigeria’s ailing 75-year-old Muhammadu Buhari in April ended with the US president telling aides he never wanted to meet someone so lifeless again, according to three people familiar with the matter,” Financial Times claimed.

In contrary to his statement, President Donald Trump had, at a meet-the-press held by the two leaders, praised the Buhari administration. He commended the President’s effort in tackling corruption and insurgency.

The 72-year-old American president had then called Nigeria one of the most beautiful places on earth, adding that he would love to visit someday.

See Nigerian reactions on Social media to Trump’s statement below.

If he truly said that, then why was he this happy meeting him in the picture below? it was reported om all social media then that they’ve not seen him this happy. I’m pretty sure he will call this new paper or who ever reported this #fakenews and rightly so too. ✌ pic.twitter.com/TNiIUp6ZyA

Thank goodness. If Trump uses such word and God calls him chosen. whose report is final? Remember everyone also condemned Trump before today.

Ask what @realDonaldTrump meant in context

What of himself? We’re happy with our scandal fee President unlike Trump.

The enemies of Trump @realDonaldTrump will suddenly become his friends now.

He that has his finger prints all over american crime scenes,who is more lifeless?

This is funny, so a lifeless person is the one constructing all the Federal roads and second Niger bridge in my zone, projects that could not be done by two living President? I rather prefer to reelect this lifeless person oo. Nija!

@MBuhari has met with several credible world leaders, if they have this opinion about him then fine. If not @RealDonalTrump is an idiot and a liar as shown in the past 18months of his horrible presidency.

Yeah. That’s why the entire West is frightened of his leadership style.

Understand why the meeting is not a success first… Trump likes taking advantage of people and countries making them vulnerable, Buhari wasn’t ready for that maybe that’s why the meeting wasn’t successful. It might be a cool idea for Nigeria. Thanks

So maybe, Trump wanted a trade advantage over Nigeria and your president was smart enough to avoid that? Your president that doesn’t know the meaning of ‘inclusive’ governance. Let’s all join hands and just destroy Nigeria, all of us will suffer it, let’s keep defending aberation

Every US President has access to high-level, top-secret, intelligence reports on major situations around the world. Rather than laugh at @realDonaldTrump‘s calling of President Buhari “lifeless”, we should ask if there’s something he knows that the citizens of Nigeria don’t. pic.twitter.com/TYeHzaaP6k

If a Noun is a name of a Living thing, Animal, Place or Things.. What does that make Buhari being lifeless ?????

If a Noun is a name of a Living thing, Animal, Place or Things.. What does that make Buhari being lifeless ?????