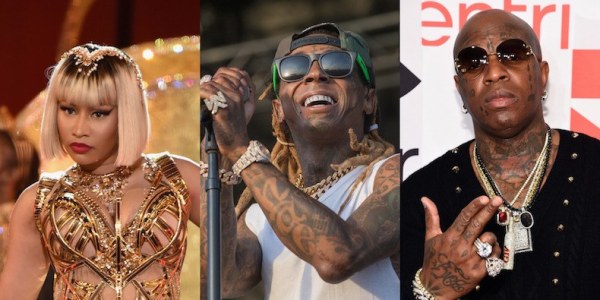 The New Orleans Louisiana native courteously accepted the public apology of ‘Baby‘ as he calls him and also recognizing the essential role the 49-year-old played in his music career saying: “I want to show love for this man who gave me my career single-handedly.“

The 35-year-old father of seven brought fellow label colleague, Nicki Minaj on stage to perform her collaboration tracks such as “FEFE,” with rapper Tekashi 6ix9ine, as well as YG’s “Big Bank.”.

The happy Wayne is seen sitting on the stage’s floor while the 35-year-old rapper and actress pumps up the crowd saying: “Who wants me to give Lil Wayne some babies?”

‘Naija To The WORLD’ – Nicki Minaj Says As She Congratulates Davido…