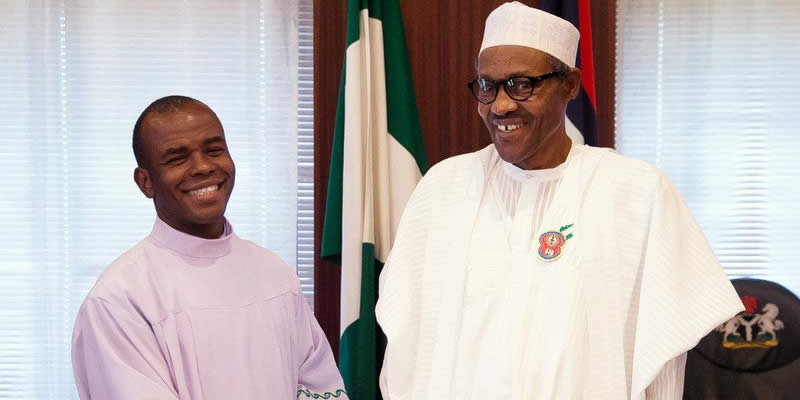 ”Despite my support for Buhari, his government has so far marginalized Ndigbo” – Fr Mbaka

According to Father Mbaka, despite his massive support for President Buhari during the 2015 general election, the South East has suffered serious marginalization to the extent that he slept in Abuja for weeks to get a loan from the Bank of Agriculture to energise his farming vision in order to create jobs to teaming unemployed graduates.

The fiery clergyman who was very open of his support for Buhari in 2015, said this when he spoke yesterday at the Adoration ground, during the flag-off of a three-day farmers empowerment programme by Multi-Life Saver’s, a corporative society made of 18 clusters with 5,000 members and visiting officials of the Bank of Agriculture.

“Whenever I went to obtain loan from the Bank of Agriculture, they would tell me to get a commercial bank that will do this and do that. The commercial banks will asked me to brink the feathers of one snake and leg of snake. It’s a sad development. If a northerner has this kind of vision they would come around him, but here, we are alone. We started it in Adani and there was no help; there was flood and we lost N830 million and I went down to Nkereife. We had the largest poultry farm in the east of the Niger. In one day we lost 939,000 births. With the type of courage God gave to me, nobody knew and nobody will know apart from the fact that I’m disclosing it now. No encouragement and they are longing for authentic farmers, and we are farmers.

“So, please, on behalf of the adoration members, we want them to monitor the funding and implementation. We don’t kill criminals here, we kill crime. If you go to Aqua Rapha investment Ltd, we have thousands of them working, yet, we don’t have governments’ support apart from Governor Ifeanyi Ugwuanyi, who remembered us and created a road to this place. People thought President Buhari is helping me, but he is not helping us with one kobo. So, those who could have been helping thought he was helping and now he has become a hindrance.

“If you go to the North, you would see how billions are spent there. If you go to my farm, there is a River that separates the land which makes it difficult for me to move equipment, and now, I’m doing the bridge by myself without help from anywhere, yet, I’m a priest. So, I’m representing the poor, that is why I’m attacking many governments because when they cannot help the poor who I represent, and when the pressure is too much on me, I attack them.

READ: I will kill myself If Buhari does not win 2019 election — Man vows in a lone protest

“Why can’t the federal government which claims to support agriculture not help the agriculturist? So, it is a poor and fake claim. Why can’t we have here a pilot farm that would be the eyes of this country? “We have in our aquaculture fishes one of the species which contains five billion fishes, but lack of good road to the farm led to the closure of that farm and the federal government is aware of this. So, for me, it is not just negligence, but wickedness and unhealthy marginalisation, because I’m not from the North. If a northerner had this kind of vision, from the Central Bank, order will be given. There are subsidies here and there to be granted, not even loan. They will have to seek grants, give the farm grants for whatever it takes. That is why the Igbo are crying. Some of us have been friends with the president, but when you seat down and think deeper, you see his nepotism”.

You are on your own, Buhari tells stranded Nigerian illegal migrants