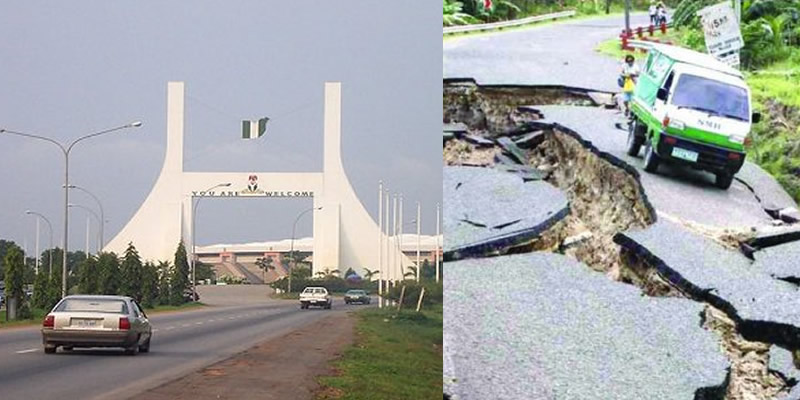 The Federal Capital Territory Emergency Management Agency (FEMA), has explained the purported earth tremor, which occurred in some parts of the city on Thursday and Friday morning.

The tremor occurred in Mpape and Maitama Districts of the FCT, Abuja. The Director General, FEMA, Abbas G. Idriss, in a statement Friday said: “The tremor was caused by sudden breaks along a fault line, resulting in sudden release of energy that makes the ground shake.

“The rock blasting and mining activities in an area could result in the underground rocks to experience stress.”

The FEMA DG urged the public to remain calm and not panic by the development.

FEMA also assured that the likelihood of any earthquake in the country was low as Nigeria is not in an earthquake zone.

The agency also issued safety tips for the public to follow in the event of continued occurrence of tremor.

The incident occurred at about 9:00 p.m. on Wednesday night and 6:00 a.m. on Thursday morning.

A resident of Mpape, who declined to be named, told Daily Sun, last night, that the tremor led to stampede in the area and that she had to take cover under her table while the vibration lasted.

More residents who lived in Eneje Street, Masafa Road, Berger Quarry and Area One areas in Mpape said the ground shook intermittently for a long period, raising fears of an earthquake.

“When it started we thought it was normal rock activity. But after a point we realised that it was abnormal.”

He said he was at his shop at Crown Plaza in the community when the two storey building started ‘vibrating.’

“We thought the building wanted to collapse. It happened at about four times when I was at the shop,” he added.

Uchenna said, when he got to his residence at Eneje Street, the vibration continued which made many people afraid of going to bed due to the incidents.

“Later we went to sleep but it happened again. The ground vibrated so much that the ceiling almost came down,” he said.

Another resident, Onyeka Chukwu, said the vibration damaged some goods in his shop.
Chukwu said some gas burners fell and were damaged while the vibration lasted.

“The first time that it happened, I thought it was normal but when it happened again, I was afraid that I almost ran out of the shop. I have been here for seven years, it has not happened like that before,” he said.

Jennifer Roberts however said similar incident happened last week Friday at Masafa Road, adding that the incident on Wednesday happened after a torrential rainfall in the area.