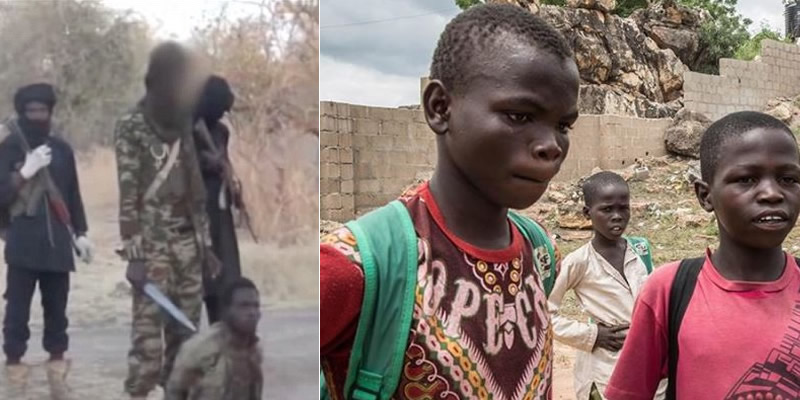 As northern Nigeria continues to recover from the ruins of Boko Haram attacks it has suffered in recent years, Al Jazeera took a trip to Gwoza, a community in Borno State to speak with children who witnessed the brutality of the armed group firsthand.

“Boko Haram, I see them use knife, chop my grandfather’s head,” said Ibrahim Daniel, a 13-year-old boy from Gwoza in Borno State.

He went on to say, ‘”the Boko Haram is something that you won’t like to see. I’d like to be a soldier because anything that them [Boko Haram] do, I’d like to do back to them. If me, I see them, me I go carry them. Me I kill am. I can help government. I can help my parents with being soja”.

According to the report, Gwoza was, and is still, a notorious hideout for the fighters. Boko Haram captured the town of nearly 300,000, in August 2014, and declared it the headquarters of what it called its Islamic Caliphate.

READ: Suspected Herdsmen on-the-run with PDP chairman’s head after beheading him in-front of his wife

Zulum: Passion should be matched with strategic action, Borno citizen…

The group’s black flags were mounted around the town and underneath them, Boko Haram members executed anyone who failed to obey their rules, dumping corpses in wells and streams. Hundreds hid in the Gwoza Hills, a set of rocky outcrops on the northeastern end of the volcanic Mandara Mountains that straddle the Nigerian-Cameroonian border.