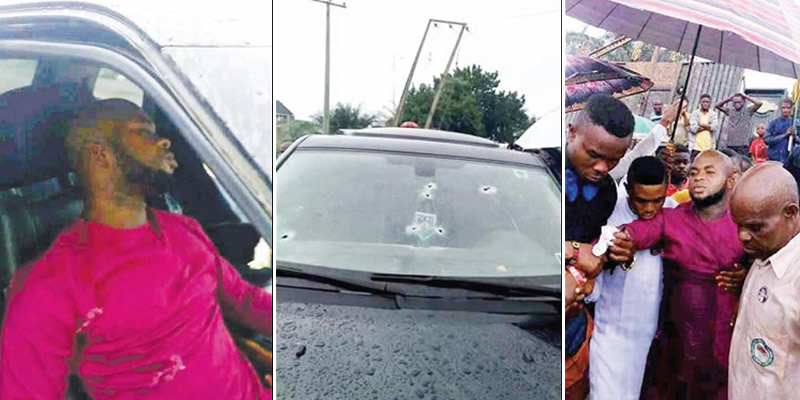 The pastor of Grace and Power Prophetic Ministry, Awka, identified as Elijah, is battling with survival and his condition could not be ascertain as of press time as he was rushed to an undisclosed place by his church members who had gathered for their Thursday worship.

The middle-aged pastor, popularly called Miracle Pastor, was said to have had his legs hit by bullets.

It was gathered that the gunmen had trailed the pastor from Enugu State.

A source told our correspondent that the assailants had demanded N5m from the victim for an undisclosed purpose but were offered N1m by the pastor, which they allegedly rejected.

“As soon as they got to his church, they opened fire on the pastor. They snatched some undisclosed amount of money from him, leaving him unconscious. His vehicle was riddled with bullets,” he added.

When our correspondent visited the church, parishioners and sympathisers were seen discussing the incident.

A resident, who gave his name as Johnson, said he was passing by when he saw some persons pulling out a man from a shattered vehicle.

He said, “When I enquired, I was told that he was the pastor of the church. Who knows what he must have done to attract this kind of treatment to himself?”

READ: Suspected Herdsmen on-the-run with PDP chairman’s head after beheading him in-front of his wife

When contacted, the Police Public Officer in the state, Haruna Mohammed, said he would get back to our correspondent.

He had yet to do so as of the time of filing this story.