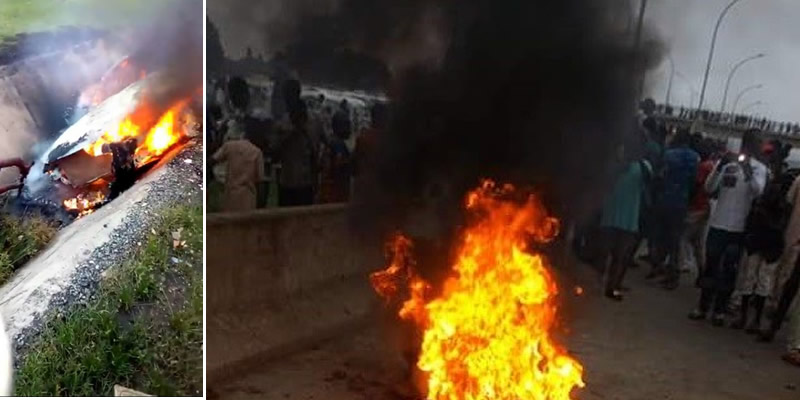 The suspects picked up a woman from Zuba heading to Kubwa and in the cause of trying to collect the woman belongings, she opened the door of the vehicle and raise dalarm.

Luck ran out on the suspects as they were stuck in traffic hence unable to escape. They were nabbed by youths in the area, tied up and set ablaze.

Read eyewitness report below and see link to video.

“At about 7:30am on the 8th day of September, two men (Adult) were burn alive in Dei-Dei, a suburb in Abuja.

What is their Offence?
According to an eye witness whom I confide in to get the accurate information, they were involved in Kidnapping a woman which is popularly known as “One Chance” for the benefit of those living in Abuja. It was reported by him that, they took the woman from Zuba heading to Kubwa and in the cause of trying to collect the woman belongings she open the door of the vehicle and raise alarm. So unfortunate for the criminals they were stock in the Hold up. Trust me, all this Hausa boys in that Dei-Dei swing into action.

They lay fire on the 406 Peugeot, tied them and put a vehicle Tire on them. Vuuuuum they light them.