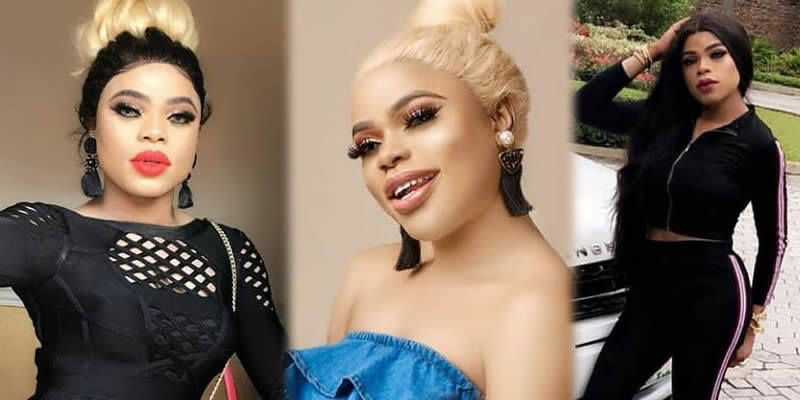 Okuneye Olarewaju Idris better known as Bobrisky has gradually evolved to becoming a celebrity in his own right, and he has not failed to give his fans something to talk about.

Even though his lifestyle is frowned at by some Nigerians, he also has a lot of fans who would do anything to talk to him, or even meet with him.

Bobrisky is now famous for his feminine ways, even though he started to be known because of his sale of bleaching creams.

Even though he was born a man, he has chosen to be recognized as a woman and he even dresses as such to better make his stance.

Bobrisky, though controversial, is actually quite stylish, and it’s obvious that he takes great care of his looks.

READ: Davido’s babe Chioma is all shades of stylish as she poses in pink jumpsuit (photos)

We earlier reported that Bobrisky was denied entry into the UK for his highly publicised meet and greet with his fans, and he took to social media to reveal the cause.

According to reports, Bobrisky was held at a detention camp near the Heathrow airport in London and put on a return flight to Lagos by 10pm to arrive Nigeria by 5am on Saturday, Septmber 8.

We also gathered that Bob was denied entry due to his visa which doesn’t permit him to work in the UK as he is in the country to make money via the event. He was also said to be in possession of some creams he intended to sell.

Bobrisky, however, stated that he was not deported or banned from entering the UK and that he was only asked to go get the right visa. Related interesting topic; ‘This man is a bastard’ – Bobrisky calls out software engineer

Man tries to cover himself with 20,000 bees in his second attempt to make it into the Guinness Book of Records (Graphic Photos)

“The only thing more beautiful than her face, is her heart”, Banky W gushes…