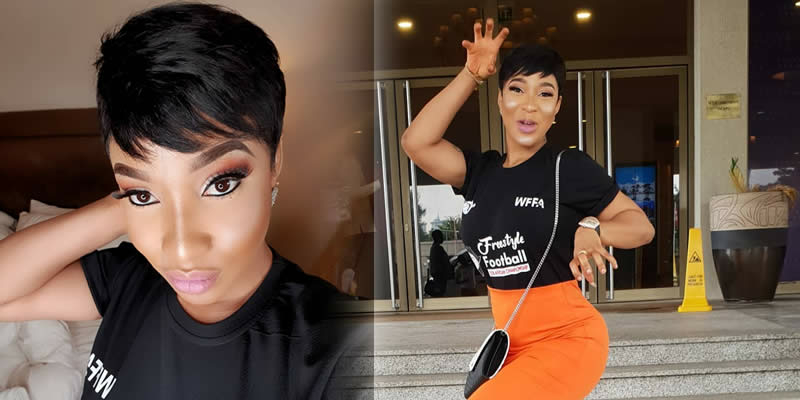 Nollywood actress Tonto Dikeh has proven that she is in the know of trendy moves. She recently shared a picture of herself doing the funny Oya Hit Me pose. Many of her fans have admitted that the posture looks good on her

Popular Nollywood diva Tonto Dikeh has always been known for catching up with the things that are in vogue. Be it in terms of fashion, music, religious matters, the actress proves her currency in many of various fields of entertainment. In a recent picture shared by her, King Tonto shows she is very familiar with the Oya Hit Me move which is sweeping the entertainment scene. The trademark pose was first popularised with Brodashaggi, a popular Instagram act.

The comedian who mostly displays his comic acts on social media made Oya Hit Me a very popular slang with his constant use of it. Only recently, he released a video that exhibited the trademark cliché and its accompanying dance moves.

Popular Nigerian dancer Kaffy has been credited with providing the video’s choreography.

Tonto who must have taken a liking to the trendy moves posted a picture of herself while attempting the Oya Hit Me pose.

She even invented her own creative version of the move. While Brodashaggi had always projected his hands in an upper stance while doing the pose, King Tonto brought her own hands downwards.

In a caption which she shared alongside the funny photos of her, the Nollywood star ascertained that she was indeed doing the Oya Hit Me pose. She even dared anyone to come hit her!

“MummyKing Oga hit them the shaggi way*** OKURRRRRRRRRR something Not light on the way..” Fans of the actress who rarely get to see her in such a hilarious pose were gratified by the images she shared. Several of them were endeared to the photos and they collectively agreed that the spontaneous pose looked good on her. Another related topic; Tonto Dikeh’s father kisses her, says if he could raise her alone, she can raise her son alone too
Share on FacebookShare on Twitter
Got News Tip? Send Us Story !
Follow Us on Google News