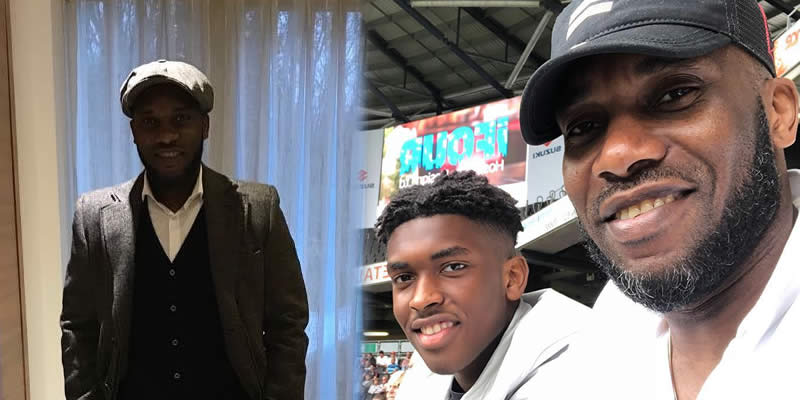 The internet has been booming with admiration since football legend, Jay-Jay Okocha shared the most adorable photo of himself with his lookalike son, Ajay.

The 45-year-old father revealed on social media that he was missing his best friend and shared a lovely selfie photo of them sitting at a stadium, clearly having a father and son moment as they enjoyed a game.

Being one of the greatest footballers in the history of football has endeared Jay-Jay into the hearts of millions of fans scattered around the world. It also helps that he is a successful family man who has been happily married to his beautiful woman, Nkechi for over two decades.

Their marriage is blessed with two gorgeous children who have grown so fast over the years. Although Okocha likes to keep a lot about his family private, he never shies away from showing off his kids on social media.

This time however, he had some young girls drooling when he showed how much his son has grown. The striking resemblance also made even more admirable and many fans expressed their admiration through comments on the legend’s page.

As expected, the photo of Jay-Jay and Ajay immediately went viral and anyone who has followed the journey of Okocha from his hometown in Enugu will appreciate what life is about as depicted in this photo.

Interestingly, being a son of Jay-Jay has its perks. Recently, Okocha, celebrated his young child as he clocked a new age and revealed that the handsome boy was having the time of his life as he celebrated his special day with his best friend, Chelsea player, Eden Hazard.

Life has to be awesome when you best friend is Hazard and many Chelsea fans can testify to that.

The truth is, Jay-Jay who was a Super Eagles and Bolton Wanderers captain was a joy to watch on the field of play during his active days considering his superb dribbling performances.

Recently, Jay-Jay Okocha celebrated his 44th birthday, and We gathered photos of some of his exotic cars. You may like to read; I’m the luckiest Dad in the world, says Mikel Obi as he celebrates his Twin Daughters’ birthday (Photo)