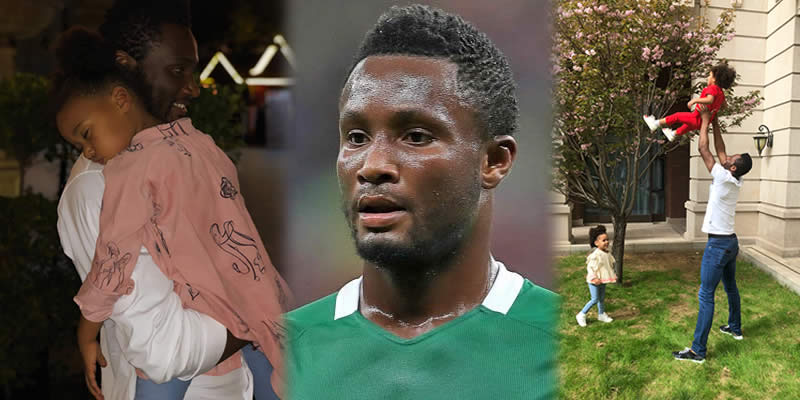 I’m the luckiest Dad in the world, says Mikel Obi as he celebrates his Twin Daughters’ birthday (Photo)

Mikel Obi, an international footballer, took to his social media page to celebrate the birthdays of his twin girls. He is married to Olga Dyachenko, and they have twin daughters from the union.

The Tianjin TEDA FC player is married to a Russain lady, Olga Dyachenko, and they have twin girls from their union.

The girls, identified as Mia and Ava, turned three-years-old on September 14, and the football star took to Instagram to celebrate them.

He posted several photos of them and he followed it with a caption that reads:

“Happiest 3rd birthday my angels❤️ Im the luckiest daddy in the world. Love you both so so much.”

Mikel and Olga seem to have a lovely relationship, despite being from different countries. His wife has been known to defend their relationship from social media trolls, who seem to like attacking her because of her nationality.

We earlier reported how Olga took to social media to reveal how she met Mikel in her father’s home and how they started their relationship.

The Russian damsel in the post disclosed that the player is a very persistent lover and she is so lucky to share her life with him.

“Five years ago today you walked into my parents house and into my life. A year later on that exact day we went on our first date, you are persistent @mikel_john_obi. I am so lucky to share my life with you and our precious little peanuts. Love you #March29 #pooh1 #pooh2 #pooh3 #pooh4” She wrote.

Mikel recently started playing for a Chinese team, Tianjin TEDA FC, and though fans were shocked at his sudden move, they have been curious to know what his new earnings would be. Related interesting story; Obi Mikel speaks on retirement after Moses dumped Super Eagles