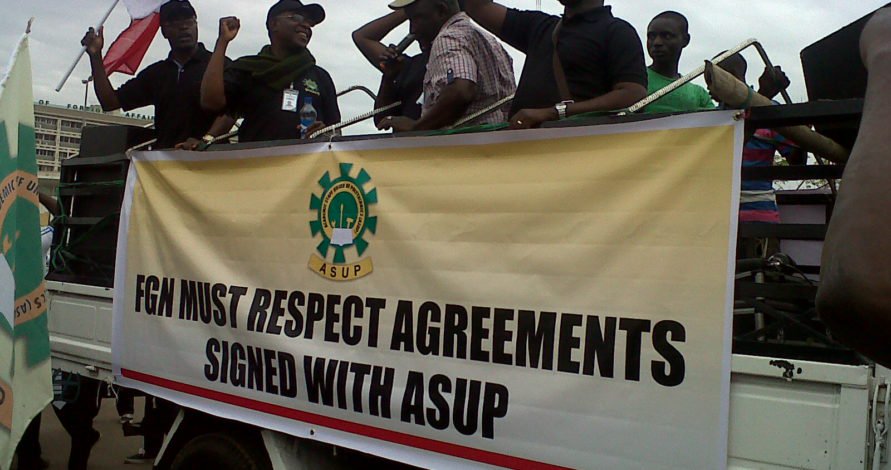 The Academic Staff Union of Polytechnics (ASUP) is threatening to shut down the nation’s Polytechnics if the government allows the National Board for Technical Education (NBTE) to continue to intimidate and force its members into the IPPIS payment platform without first securing their emoluments.

ASUP is also accusing the government of not keeping faith with the memorandum of settlements signed with the union in 2017, while frustrating the renegotiation of its agreement with government which was supposed to have been concluded in December 2017

National President of the Union, Usman Dutse said in a statement made available to newsmen in Abuja that after all efforts to make the government implement its memorandum of settlement to no avail, they have no option than to give the, government a 21 day ultimatum beginning from 2nd of October.

Key issues in the dispute between the government and the union are: The non-implementation of the NEEDS Assessment report of 2014; Non release of promotion arrears of members as well as persistent shortfalls in the personnel releases of Federal Polytechnics since 2016; nonpayment of negotiated allowances in polytechnics; nonpayment of salaries and other staff entitlements in many state owned institutions; non release of CONTISS 15 migration arrears; infractions in the appointment process of rectors in polytechnics; non passage of the amendment bill of the Polytechnics Act and victimization of union officers.

“The last meeting which took place in march 2018 was postponed to enable the renegotiation committee conclude its assignment and provide the needed security in the capture of the totality of members’ emoluments.

“However, in an apparent display of betrayal, the NBTE which has refused to commit to the successful conclusion of the renegotiation process is employing underhand strategies to force our members into the platform with or without our emoluments secured.

“We are appalled that the NBTE had kick started this new arm twisting regime by convening a meeting with the IPPIS and the managements of polytechnics without the unions, where they resolved to force our members into the platform.

“It is on record that the other legs of the tripod in the tertiary division of the nation’s education landscape are not facing such level of intimidation. This has strengthened our position that the future of polytechnics in the country indeed lie outside the regulations of the NBTE.

“Following these observations, the meeting of the NEC of our union has been left with no other alternative than to return to the trenches to fight for the sector, our members, our students and indeed the Nigerian state.

“We are therefore using this medium to issue a 21 day ultimatum effective 2nd October, 2018 for the government to address these lingering issues and call the NBTE to order or face an avoidable total and comprehensive shut down of the sector.”

Dutse said further that “The memorandum of settlement (MoS) signed as a precursor to suspending the industrial action prescribed actionable timelines as well as a monitoring mechanism in the form of a rapid response team led by the Permanent Secretary, Federal Ministry of Education.

“In August, 2017 the committee for the renegotiation of the FGN/ASUP 2010 Agreement was inaugurated by the Honorable Minister for Education. The committee was saddled with the responsibility of renegotiating the last agreement signed between the government and our union since 2010. This agreement was due for renegotiation by 2015 according to the prescriptions of the agreement and in line with ILO conventions.

“The renegotiation process was expected to be completed by December, 2017 according to the design of the committee as well as the mandate of the Honorable Minister on the day of the inauguration. Our union made its submission to the committee in October, 2017.”

He said added that “the NEEDS Assessment report of 2014 remain unimplemented while the government’s excuse of “searching for sources of funding” increasingly becoming watery in the face of reports of recent releases to a sister sector as revitalization fund, amplifying the echoes of discrimination.

“Shortfalls in personnel releases still persist in some Federal Polytechnics while arrears of same shortfalls are still owed; allowances of our members are still owed in arrears and unpaid in many institutions without any effort at properly situating the responsibility of paying these negotiated allowances.

“Salaries are still owed in many state owned institutions with some owed up to ten months arrears. Deductions of check off dues, pension, and welfare benefits of members are also unremitted in some state institutions.

“Arrears of CONTISS 15 MIGRATION are still owed for the lower cadre with the government appearing rudderless on the issue, while the amendment bill of the Polytechnics Act is yet to be signed into law.

“Our officers are still being victimized with new grounds of tyranny being broken in reports of purported proscriptions of our union in some states. This is well over the time lines specified for each of these items.”

The union accused the government of not being interested in smooth implementation of the memorandum of settlement, saying “the rapid response team set up for the purpose of monitoring the implementation of the terms of the MoS operates in serial default of its own terms. The team was designed to meet on a monthly basis to assess the performance indices in the MoS.

“Regrettably, the team has only met three times in nearly one year. This is despite letters written by our union aimed at jerking the team off its lethargy. As a result, the monitoring mechanism has broken down, painting a picture of hopelessness in the successful implementation of the terms of the MoS.

“The renegotiation of the union’s agreement with the government has stalled and is yet to commence in actual terms. The committee was designed to complete its assignment on or before December, 2017.

“The committee had its last (and 3rd ) meeting in April, 2018 and is yet to reconvene despite letters from our union urging the committee to do the needful in view of the strategic importance of the process to industrial harmony across our campuses. We are therefore led be these to doubt the sincerity of the renegotiation process in its entirety.”

Photos of ex-president, Goodluck Jonathan with his daughter Faith, her hubby and grandchildren

GTI: What The World Needs To Learn From The Nigerian Army