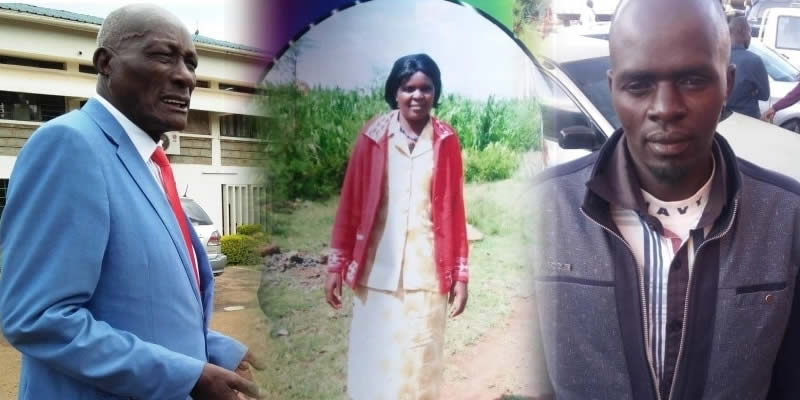 Isaac Kosgey, a casual labour at a flower farm in Eldoret said his wife left their matrimonial home after a stint of association with controversial politician Jackson Kibor. Mercy had began behaving suspiciously and barred him from picking her from workplace

A 38-year-old man from Eldoret in Kenya, kosgey a wealthy farmer, has accused a controversial politician Jackson Kibor of snatching his wife of 13 years.

Isaac Kosgey claimed that his 30-year-old wife, Mercy Jepkemboi Sultan, had vacated their matrimonial home just a month after a stint of suspicious association with the old man.

It was gathered that Kosgey made a report at Eldoret police station on Thursday, October 25, indicating he feared for his life after the 83-year-old tycoon lured his wife away with regular lifts in his high-end vehicle.

“There has been a problem in our marriage from September when my wife began behaving suspiciously. I had just bought a new motorbike and would pick her every evening from Eldoret town where she works in a pharmacy store . She said motorcycle rides were exposing her to cold,” the man said.

Kosgey added that he was not satisfied with his wife’s reason to bar him from picking her up and was even worried when he realised her shoes did not have any mud when he came back from work despite being a rainy season.

“A neighbor told me Mzee (Kibor) had been dropping my wife. One day I told my wife I would be late at work to which she did not object. I came back early and hid at my neighbour’s place. I was shocked to see my wife being dropped at home by Kibor in his expensive car,” he claimed.

According to him, he was hurt to see all that unravel before his eyes especially as his wife insisted that the octogenarian was her client at work.

“She could not explain why Mzee was dropping her home. She walked away with her belongings the following day and later picked up our two daughters who are in Standard Six and Three secretly to an unknown place,” said the man who works in a flower farm.

READ: I bought you car and you did this to me, white woman who falls victim of Yahoo Boys cries

An angry Kosgey said he would not follow up his wife vowing never to marry again but demanded that her dowry of two cows he had paid to Sultan’s home be refunded.

Contacted over the allegations, the mother of two said her husband was an insecure and lazy man who could not provide for the family and spent most of his time spying on her.

She said: “He has not even paid dowry to our home. It is sad that he cannot allow me to talk to anyone and has habit of checking my phone to see who I talk with. Kibor is our client and he just dropped me that day because we had closed shop and were going to the same direction.“

Kibor who recently confessed to the court he was polygamous when he successfully filed a divorce against his second wife, Josephine Chepkoech, laughed off the allegations saying he did not even know his accuser.

“I just gave the lady a lift that one day and we were several people in the car. Is there anything wrong with giving somebody you know a lift? Let him provide evidence to prove I have snatched his wife. She is not in my house because I am married,” the 83-year-old said.

Kosgey alleged Kibor who had said he did not mind marrying a younger wife to add to three others had rented his wife of over a decade a house in an affluent estate in Eldoret.  You may also like; Beautiful maternity photoshoot of 3 sisters who are expecting 4 babies at the same time