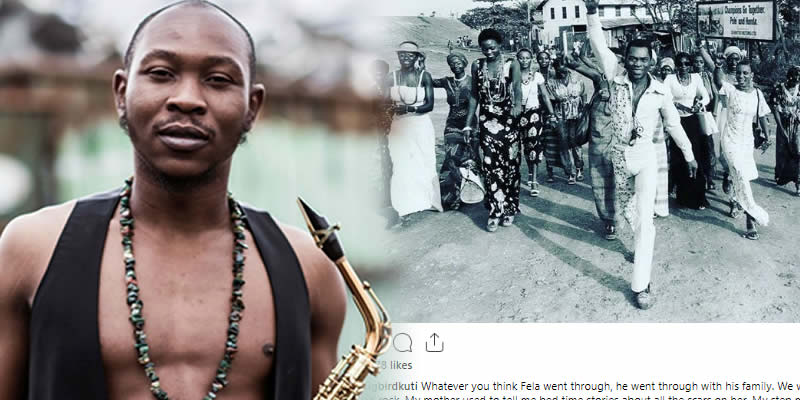 Seun Kuti has revealed that while everyone now wants to associate with Fela and his legacy, they weren’t there when his family had to endure the struggles of being a part of Fela’s life.

He said Fela’s women, including his mother and his step mum Najite, suffered brutality in the hands of Nigerian soldiers who oppressed them because of Fela’s fearlessness. He added that their home was usually invaded by trigger-happy soldiers.

Whatever you think Fela went through, he went through with his family. We were his rock. My mother used to tell me bed time stories about all the scars on her. My step mum, Najite was the first person the soldiers saw in kalakuta, she was swimming, they picked her up by her head from the pool and broke her neck!! My mother had a broken bayonet stitched into her and she couldn’t walk for 18months. The amount of state sanctioned violence I have seen in my life as a child. When I was 9 I saw the cops shot and kill one of my dads boys in front of shrine and just left him there for nothing. Fela tried to protect us but u can’t protect anyone from that! You know these fucking cops would come to our house and just shoot up the place at least 2ice a week? Do y’all know that? Or u think this is just play play? See Fela’s music is a gift for the world and everyone is welcome but our legacy is ours alone, to protect and nurture. Y’all fakers stay waaaaay back. This isn’t your space. #getthesax 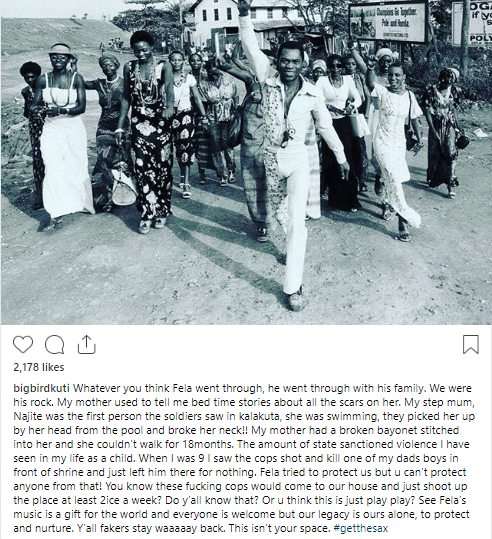 You may also like; Nina strikes a pose with her Mother & Sisters as she celebrates her Mother’s birthday (Photos)