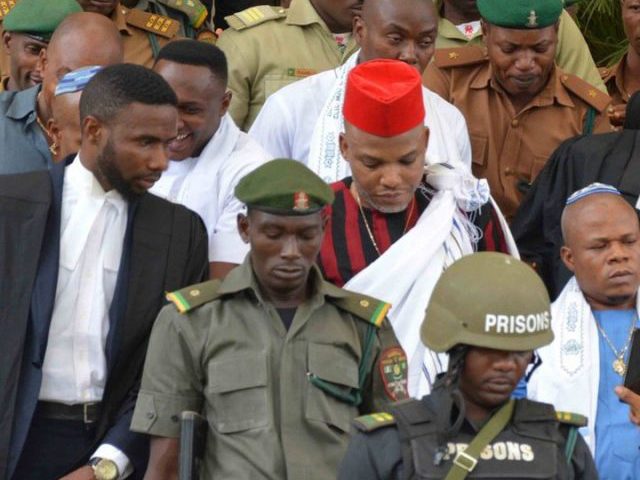 The court was also told to order their arrest and prosecution after proper investigation must have been done on how the IPOB leader fled the country.

According to the plaintiff in the matter, Isaiah Agidi Ayugu, a lawyer,  Senator Abaribe and Fani-Kayode aided his escape.

In the suit marked FHC/ABJ/CS/1254/18, the plaintiff asked the court to immediately order the respondents in the matter to commence investigation into the circumstances surrounding the escape of Kanu from Nigeria,  after the Nigerian Army were accused of abducting,  arresting,  killing and assassinating him.

Ayugu, in the suit filed through his counsel,  Oghenovo Otemu,  prayed the court for an order mandating all the respondents in the case to investigate and prosecute Senator Eyinnaya Abaribe, Femi Fani-Kayode,
Ifeanyi Ejiofor,  Tochukwu Uchendu, Emmanuel Shallow Ben, Emmanuel Kanu, Uchechi Kanu and all those who worked together to propagate and spread lies and falsehood that Kanu  was abducted,  kidnapped,  arrested and detained by the Nigerian Military,  when indeed they were well aware of Kanu’s whereabout because they played roles in helping him to disappear from Nigeria.

The plaintiff said during the period when the blackmail was against the military and the Nigerian government,  he suffered emotional and psychological trauma as his freedom of movement and rights were hindered both at home and abroad.

He said so much pressure was asserted on the federal government and its agencies by Senator Eyinnaya Abaribe, Femi Fani-Kayode.

He said in the affidavit attached to the origination motion exparte,  “That the said Nnamdi Kanu,the so called self acclaimed leader of the Indigenous People of Biafra (IPOB), a group that has long been proscribed and designated a terrorist group is alive and was seen in Israel from where he called a World Press Conference and made a live broadcast of his new and renewed agenda for his group. In the broadcast,  Kanu boasted that he will bring “Hell to Nigeria”.

“That it is therefore clear that whilst Senator Eyinnaya Abaribe, Femi Fani-Kayode, Ifeanyi Ejiofor,  Tochukwu Uchendu, Emmanuel Shallow Ben, Emmanuel Kanu, Uchechi Kanu, leaders of Afaraukwu community in Umuahia North Local Government Area of Abia state, the different Civil Liberty Organisations and media practitioners and so many others too numerous to mention were making several dangerous claims that Nnamdi Kanu has been killed, abducted or being held by the Army of government,  they were aware that he was actually out of the country by their collective or respective assistance from where he resurfaced in video clips of him praying in Israel and subsequent video broadcast.

“That because Senator Abaribe took Nnamdi Kanu on bail,  the case against Nnamdi  Kanu has not seen the light of the day as Nnamdi  Kanu has now jumped bail.
He accused the outlawed IPOB of stockpiling arm to truncate the 2019 general election.

No date has been fixed for the hearing of the case.