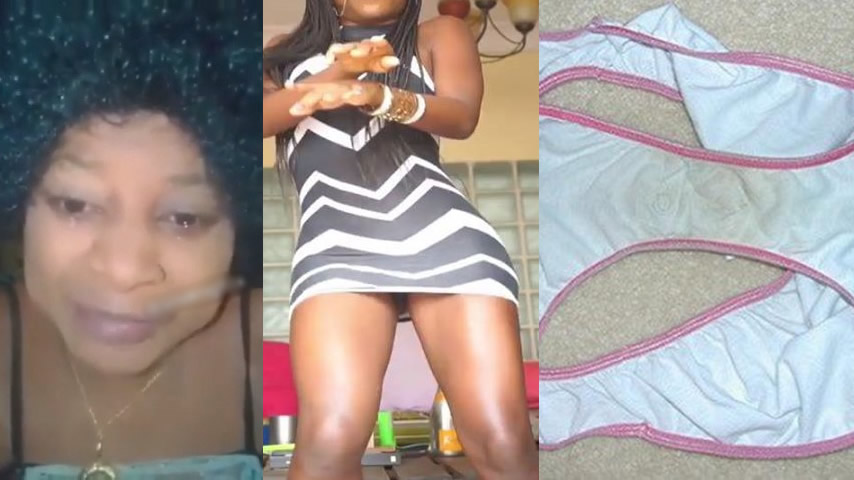 Last month, a Nigerian man took to social media to warn ladies to be very careful with their panties to prevent them from being sold for ritual purposes.

Now, a lady has cried out online (literally) as she claimed her friend’s boyfriend sold her panties for purported rituals and ‘rendered her barren’.

According to the lady who cried bitterly in a video currently trending online (watch below), she alleged that her friend revealed the shocking news to her.

She claimed that the boyfriend simply identified as Emeka who is based in Malaysia, was constantly selling her panties.

It was reported that when the Malaysian based boyfriend returned from Owerri, Imo state, he told his girlfriend to come and visit him for one week where he gave her a dozen of panties to wear.

The girlfriend reportedly said that anytime she wears a pant, it gets missing but she didn’t bother because there were others to wear as she claimed she didn’t know the boyfriend was selling them.

The lady in the video claimed her friend went to a pastor for prayers after an issue as he told her that six of her panties have been missing which she confirmed. It was alleged that the boyfriend sold them to make more money and allegedly took her womb in the process.

She claimed that the particular pant she wore to visit the boyfriend went missing and was sold for a higher price, N350K, according to the pastor.

The lady in the video who broke down in tears during the broadcast, cursed all internet fraudsters known as ‘Yahoo Yahoo’ boys involved in this kind of business – saying they will never know peace including their families as she claimed that her friend will never bear a child, according to the pastor’s revelation.

The lady also urged other girls to be careful and not to trust anyone especially the ‘Yahoo’ boys and to be careful with their panties when visiting their partners.