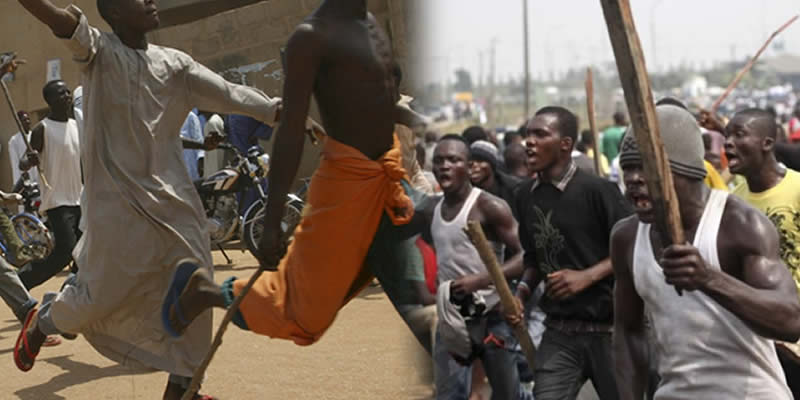 Four youths between the ages of 20-30 years were on Sunday gruesomely murdered by rivalry cult group in Bendeghe Ekeim in Etung Local Government Area of Cross River State.

The incident, DAILY POST gathered was linked to the renewed secret cult war between two rival cult groups in the area.

It was further gathered that a disagreement between some of the young men, suspected to be members of the Vikings and Klans, led to the first shooting to death of one of the youths before reprisal attacks, which consumed another three.

An eyewitness, who pleaded that his name should not be mentioned, said that the incident occurred on Sunday night and extended to early hours of Monday where four youths were gruesomely murdered.

“The incident started on Sunday and extended to early hours of Monday. It has recorded the death of four hefty youths. You can see the corpses; that one has a cut to the lower back which exposed his kidney (He pointed at the corpses).

“The other one has a bullet hole in the chest which means he was shot on the chest and killed. Look at the other one lying on the stretcher, see the matchet cuts; these kids are heartless unto themselves,” a source stated.

Speaking with our correspondent in Calabar, an indigene of the community, who is the Special Adviser to Governor Ben Ayade on Cocoa Development, Dr Oskar Ofuka regretted the incident.
READ: Small Japron, notorious cultist reportedly killed in recent Somolu cult clash

He said, “I left my community (Bendeghe Ekeim) yesterday (Sunday) to Calabar and in the morning of Monday, I got information that by 9pm Sunday, there was mayhem and four hefty youths full of life were murdered by suspected rival cult group.

“Bendeghe has been known for peace for over two years and these boys went round and murdered four youths in cold blood, the boys were gruesomely murdered and their bodies taken to Ikom mortuary by the Police.

“What happened is regrettable and a cause for serious concern and we called on the people of the area to eschew violence and embrace peace as initiated by Governor Ben Ayade.

“This one clash too many is not welcome at all, fighting between two rivalry groups does not bring development, our children should give peace a chance.

“We have just celebrated two years of continuous peace in the area before this happened. Our youths have been maintaining this peace before this incident occurred on Sunday

“The entire community is thrown into mourning and I called on the police to fish out the perpetrators of this heinous crime, they should investigate the causes of this clash and brought the suspects to book

“This is not the time for this kind of incident; we should see ourselves as brothers and sisters” he advised.

“The incident happened around 3-4am on Monday, it was an incident that continuously happened between two rivalries cults groups, vikkings and klans men.

“Actually, they have fought between themselves and some people have sustained various degrees of injuries. We have deployed team of police men to the area.

However, he said that the village has been deserted because they knew what they did. “We are not going to rest until we arrest the culprits. We have not received any information whether it was politically motivated or not but I am sure it was a clash between two cult groups,” he stated. You may also like to read; Nigeria Army discovers illegal security training camp in Taraba