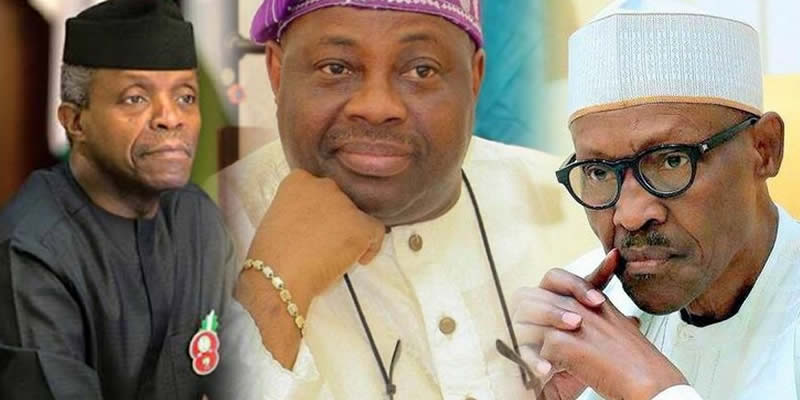 Momodu stated this while describing Osinbajo as pillar of APC administration who has made significant achievement in the past few years.

He noted that Nigerians would not have noticed the weakness of President Muhammadu Buhari’s administration if Yemi Osinbajo was made to perform professionally, citing his period while as acting president.

He, however, pointed out that Osinbajo has not been able to perform at his best because of “banal politics of parochialism in the country.”

Momodu on his Twitter page wrote: “I love our Vice President PROFESSOR YEMI OSINBAJO for many reasons, smart, intelligent, cerebral, God-fearing, energetic, and so on… He is one of the reasons many of us placed high hopes in the BUHARI Government.

“He and a few others have made significant contributions to the modest achievements of this government but I doubt he’s been able to perform optimally because of the type of banal politics of parochialism we play in our clime.

“No one would have noticed the palpable weaknesses of this government if Osinbajo was allowed to run shows in a more professional manner. We saw the obvious difference anytime he had acted as President.

“He is now the major pillar of Buhari’s Presidential campaign crisscrossing Nigeria and beyond to make up for the gaping holes in a government that promised so much but delivered too little.”

The media Mogul further expressed concern over the position of the Vice President come 2019 if APC emerged winner.

“I pray he is not being overused and over-stressed at the moment and hope, when tomorrow comes, and by some stroke of miracle they win, he would not be discarded and made redundant while some invisible forces begin to flex muscles again.

“This is a sad reality Nigeria has to live with until our great country is restructured, one way or another,” Momodu added. You may also like; 2019: Bola Tinbu Reacts To The Allegation Of Working With Atiku To Defeat Buhari