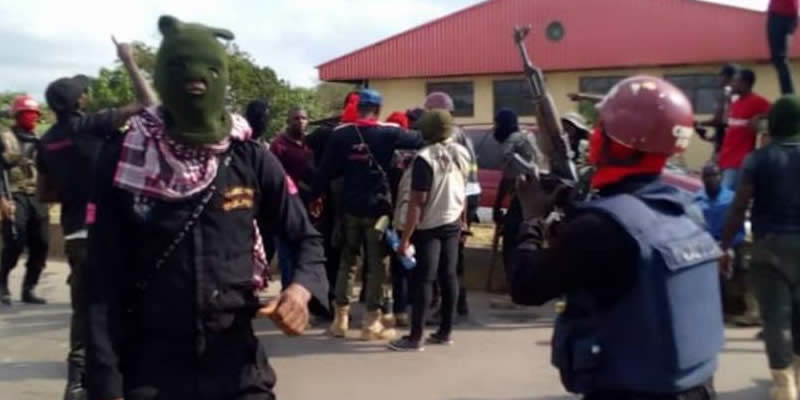 Scores of operatives from the Counter Terrorism Unit of the Imo State police command on Saturday blocked the Owerri/Orlu road in the state capital in protest.

The operatives who were demonstrating for the second day in a row caused traffic gridlock and panic in the area.

Shooting sporadically into the air, the demonstrators wore masks to hide their identities and set bonfires on the high way.

Narrating their ordeal to newsmen, one of the policemen said, “we have been pushed out of our quarters on Orlu road by the management of Federal Medical Center, Owerri.”

“To make things worst, our commander supported the act and no alternative place has been provided for us.”

Video: Family demands justice for son who was killed in a hotel in…

“We moved into this place in 2015 after our quarters in Nekede was marked for renovation. But this base 7 of CTU of Nigeria police Force started operation in this state in 2011.”

“We have done more than enough to ensure safety and security in this state. This is not the best way to treat us considering the kind of work we are doing in this state.”

“As we demonstrate, our families are stranded. Bulldozers are destroying the quarters. Our property, documents, credentials and other personal belonging are outside.”

“We demand better treatment. We are human beings working for the betterment of this country. We should be treated like human beings not like animals.”

When contacted, the State Command Public Relations Officer, Orlando Ikokwu, told our correspondent that alternative quarters have been provided for the protesting policemen.

The command spokesperson said that the state commissioner of police, Dasuki Galadanchi, had instructed the CTU commander to ensure that his subordinates settled in the new quarters as quickly as possible.

Ikokwu said that the protesting cops failed to understand that the quarters were they were ejected from was not supposed to be their permanent quarters.

He said that the protest would not deter the command from fighting crimes and making the yuletide period a crime-free one. You may also lke to read; Niger Delta University Students Protest The Killing Of A 16-Year-Old Colleague By Cultists (Photos)