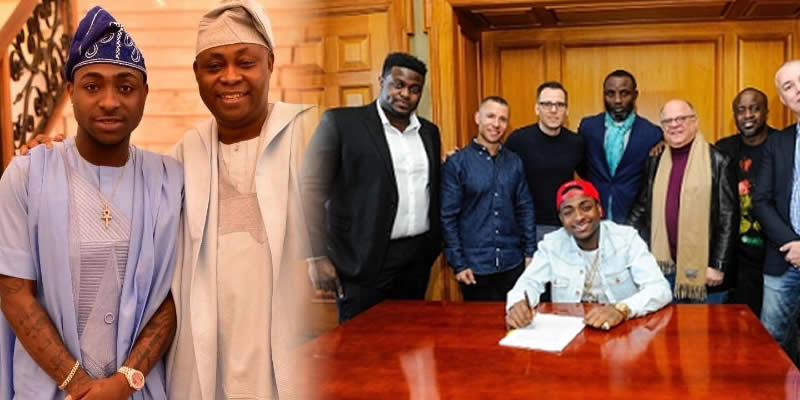 By Aanu Damilare On Nov 22, 2018
Share FacebookTwitterWhatsAppReddItPinterestEmailLinkedin
At 26, Davido has had more than his fair share of controversy- and he has conquered every single one of them.

Google his name now and what you see is a lot of news stories about friends of his dying, police inviting him to make a statement about his involvement and lack thereof, his first baby mama wishing him well and a thousand other truths, half-truths, and outright falsehoods. Not to mention the Lagos State Commissioner of Police reading out Davido’s home address in front of a few cameras that parlayed into a billion eyeballs around the world. Nice job Sherlock.

Skiibii, Davido, Ehi and other celebrities who bought mansions during…

The easy (and to be fair, uncharitable) thought to fans and nonfans alike would be the Donald Trump way: he knew what he signed up for. Yet when JAY-Z delivered the above line on his Kingdom Come album, he was 37 years old- ten years removed from his first album and at least twenty away from his drug-dealing life. With half a billion dollars to his name at the time, he described the fame his career had attracted as worse than a heroin addiction. Imagine what it would feel like to a 24-year-old Nigerian artiste who has seen and experienced everything life has to offer in only six short years. Again for context: the almighty JAY-Z who is arguably the most powerful hip-hop artiste in the world, did not release his first album until he was 26 years old.

In the light of his recent travails-three of his friends passing away in one week- it is convenient, like several people have done, to point fingers at him and say he had it coming. Afterall, the man lives better than 90% of Nigerians do. He already has more money than many of us would see in a lifetime- and he’s not apologetic for it at all. On the contrary, he’s in-your-face: always flaunting his cars and jewellery and rockstar lifestyle. It’s hard to be sympathetic when he’s always shouting about the 30 billion naira his father allegedly has. The schadenfreude that followed is a normal reaction of a people oppressed and (rightly or wrongly) see wealthy people as ‘the enemy’. There’s a Nigerian phrase for that: onpe! Na God catch am…

READ: ‘I’m a millionaire now’ – Davido Declares, but fans are asking what happened to the 30 Billion

But when you peel back all the layers, Davido’s life- for all the private jets and diamond chains and dollars he shows off on Instagram- could be less dramatic. And he too would have preferred it simpler, if it was all in his control.

It took only a few months into his burgeoning career before a scandal found him, albeit not one of his doing: a photograph of him with a lady (who was described as a hooker by those who know) surfaced on the internet. Davido was fast asleep and obviously taken advantage of by an excited groupie who wanted to have the moment for life. Few years before, a more explicit photo of Wande Coal had appeared in similar fashion and his label at the time, Mohits, issued a shoddy press release saying it wasn’t him- the whole world saw the face clearly. Davido did no so such thing, just brushed it aside like it didn’t happen. His relationship with women would create several other incidents that could have derailed his career.

In 2014, it was reported that the young pop star was expecting a baby with an older girlfriend by the name of Sophia Momodu. Although the pair were never official, Davido played the role of eager father to be and even showed up at the baby shower. He seemed unbothered, excited even. But the facade of a happy couple faded away as soon as baby Imade was born in May of 2015. Feeling trapped with the baby and the mother who he claimed was becoming a wife, Davido ordered for a DNA test to ascertain that the child was truly is. It was sure that the relationship between the two parents could never stay the same after then. Like his father had done with him, he provided all the financial support that the mother and child could need.

Matters came to head when Sophia’s uncle, media mogul and socialite Dele Momodu got involved. The crisis that followed is well reported: Uncle Dele accused the Adeleke family of attempting to separate his niece from her daughter, intercepting a flight at the Lagos airport where the baby was supposedly travelling with Davido’s sister. As a journalist of over three decades, Dele Momodu made sure that every media outlet saw the footage of him arguing with Davido’s father, creating a ruckus so loud that airport officials could not have ignored, thus thwarting the plan. The Adeleke family explained the move as taking the baby for medical attention because ‘her mother was a drug user whose continuous smoking had caused a respiratory disease in the child’. Davido wasn’t apologetic and he mocked the much older Momodu in two of his songs later on.

One would think that this debacle would have slowed his roll: instead, Davido had another daughter a few months later. Although this was devoid of the animosity of the Sophia Momodu case, it showed that he really didn’t care- at least he could take care of any children he may birth in these his wild-oats-sowing days.

Bewildering though, was his explanation when a third woman alleged that he was the father of her own four-year-old child as well. Ayomide Labinjo alleged that she and Davido had had unprotected sex when he came to Ibadan for a show in 2o13 and a pregnancy had followed. In a Punch interview, Labinjo explained in details how Davido had initially ghosted her when she told him of the pregnancy but later got in touch when the baby, yet another daughter was born- only to carry out a DNA test later on that absolved him of the paternity.

Davido did not deny that he had sex with her nor did he deny that it was sans protection. He merely said at the time that he tests himself for HIV every two weeks- as if that would make his irresponsible act less shocking. How can a celebrity of his calibre have casual sex without protection?

But Davido’s scandals were not limited to women: he’s reputed to have a temper and often comes across as not caring if he’s liked or not. Once he gets on stage and people swoon, all is well in the world. He was reported to have gotten into a fight with Iceprince at a Delta hotel in 2016. On an MTVBase prank show, he’d lost his temper and flung a water at the prankster who dared come into his house. He has fired and rehired his first manager Asa Asika; he has unabashedly bashed his cousins when they fell out; he has fired Kamal Ajiboye, his manager who held his hand as he secured the much talked about SONY deal and he uses social media to lash out at anyone who he feels is ‘hating on him’.

He even became irritatable after the SONY deal seemed to become an encumbrance rather than a plus and he soon cut himself loose and returned to Nigeria after a largely ineffectual stay in the United States. What’s more, he has never apologized for any (perceived) misdeeds, only feeding off the adulation of his fans.

Still, he hasn’t been a complete jerk the whole time: he has used his fame for a number of charitable causes. There was the Akwa Ibom boy, Utibe who he got a house for as well as a namesake of his that needed tuition fees. Davido came through, despite the fact that that one became belligerent when he seemed like O.B.O wasn’t good for his word.

All of the above have had very little effect on Davido. The scandals that his relatively young career has experience bounce off no sooner than they happened. Older artistes would have to take a break to recalibrate their careers but Davido has not needed to: he’s the Teflon Don on whom nothing sticks.

The recent crisis that saw three of his friends pass away in the space of one week would have shaken anybody to his core. Even if he was not at all connected to DJ Olu and Chime’s death, he was seen partying with Tagbo Umeike moments before that person breathed his last. To worsen the case, the corpse of the deceased was retrieved from a car belonging to Davido and Caroline Danjuma who was later revealed to be in a romantic relationship with Tagbo, cried foul and pointed at Davido as being responsible for the death.

For a while it seemed like the Lagos Commissioner of Police, Edgar Inohimi was eager to pin the death of Tagbo on Davido, organising a bewildering press conference where he read out the singer’s home address to the world and accusing him of lying about his connection to the death of his friend. An official statement from Davido’s lawyers soon put an end to that talk- they affirmed that the two were not together when Tagbo died. End of.

All of these have not slowed Davido down. Sure he cancelled a couple of his shows that fell within that period but service has resumed as normal. He has shut down stadiums in Guinea and Sierra Leone. Tonight he would be headling a show in Botswana. Davido is still the biggest Nigerian act in the world. The only other comparable musician is Wizkid. His song IF, will most likely go down as the biggest Nigerian song of 2017.

His indestructible artistry is almost inexplicable: all of the crises should have broken him- or at least slowed him down. Like Kanye West said, people lined up to see him sinking; instead he arose from the ashes like a phoenix.

Some of the most enduring stars this world has ever seen have an inexplicable constitution. Beethoven should not have been able to write music after he became deaf. Van Gogh should not have been able to paint with his own colour-blindness. Davido’s family’s wealth notwithstanding, his career shouldn’t be this prosperous- and the hurdles he has had to scale should have held him back.

Nevertheless, he had straddled each one like a true Olympian. He has played each had life has dealt him like a Las Vegas poker champion. It is no coincidence. Some artistes have that transcendence that holds them safe above the fray. Davido is one of those artistes. How fitting that his EP with SONY is titled Son of Mercy.

Because that is exactly what he is. You may also like to read; Heartbreaking As Five Year Old Boy With Cancer Apologises To Mum Before Dying In Her Arms