Another bang to a Nollywood actress, Iyabo Ojo is on set for a new movie from the controversial blogger, Kemi Olunloyo.

The beautiful actress took to her Instagram page to post a picture of herself rocking a pregnancy costume from a pregnant woman scene and told her fans to caption the photo. 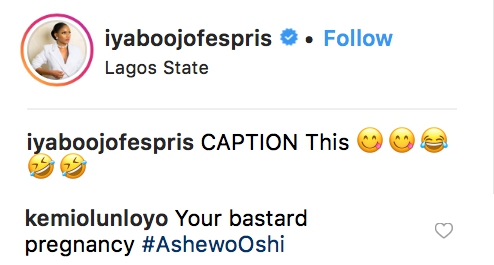 Few days ago, Iyabo Ojo ranted on Instagram about how her fellow actors are involved in so much gossiping, backbiting and backstabbing. She also criticized them for not being supportive. In the lengthy Instagram post, she asserted that the local film industry is filled with fake people.

Her note appears to have irked Kemi Olunloyo who has re-emphasized that Iyabo Ojo who is one of the richest actresses in the industry slept with a pastor.

After the post, self-acclaimed investigative journalist and blogger, Kemi Omololu-Olunloyo fired back and launched a fresh dose on actress, Iyabo Ojo.

Madam KOO as she is fondly called claims the entire Nollywood corroborated the intelligence she got on Iyabo Ojo. It would be recalled that Madam KOO spent about a year in Port Harcourt prison after releasing an expose which alleged that Iyabo Ojo was warming the bed of Salvation Ministries founder, Pastor David Ibiyeomie.