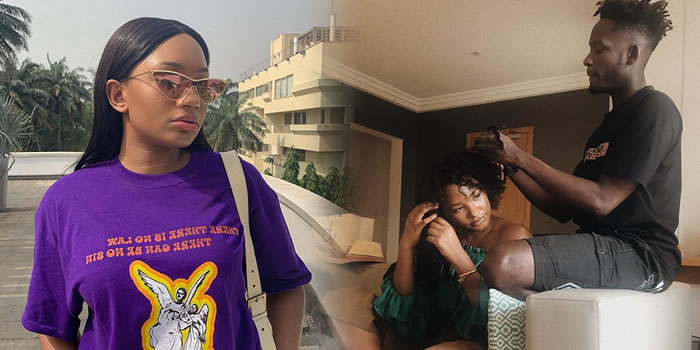 Mr Eazi and his girlfriend, Temi Otedola, are dishing out major couple goals on social media and the internet is here for it.

The musician shared a photo of himself helping his lady loosen her hair and many fans are going nuts over how simply adorable it is.

Recall that it took a while for the lovers till admit they were an item. When first started suspecting that Mr Eazi and billionaire heiress, Temi Otedola were dating, the couple decided to put it on the low and did not confirm or deny the claims.

In recent times, it has become more obvious that they are completely in love and dating. It came as no surprise when Mr Eazi decided to be based in London which is where Temi herself resides. Then they graduated to posting photos of each other on social media and it was clear that they were an item.

In his most recent post, Mr Eazi can be seen being a romantic boyfriend as he helped his woman take out her hair. Only a few African men, can will be caught dead doing such but here is Eazi proudly taking care of his woman.

If this is not the ultimate relationship goals, we do not know what is!

SAD! 11-yr-old finally hang self to death in Delta after several suicide threat