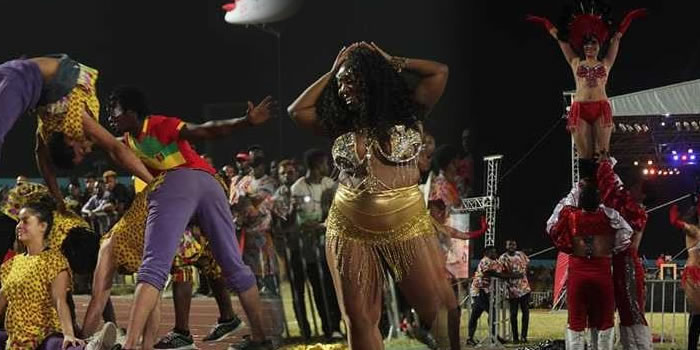 The 2018 Calabar Carnival witnessed several countries come out to participate in the parade on the fourth day of the festival. The event which took place at the Calabar stadium, was filled with beautiful performance and cultural display from different countries. The band representing Switzerland emerged as winner in the competition

The 2018 Calabar Carnvial will indeed remain in the hearts of many who witnessed the beautiful festival. From bright colours, beautiful music and display of diverse cultures, the carnival described as one of Africa’s biggest street party indeed lived up to its reputation.

In the showcase of cultural beauty and flare came the entertainment which captivated the audience. From beautiful traditional attires to alluring dances and songs, the countries clearly brought on their A game to the festival.

After the numerous countries displayed their wonderful culture, the announcements were made and the 1st prize was awarded to Switzerland, while the second and third prize were given to Mexico and Lithuania, respectively.

The very flexibility displayed by the band from Senegal left many people cheering on with excitement. The same excitement was displayed when Ethiopia presented their beautiful and rich culture in form of dance.

USA and Canada also brought their best moves to the tracks and not only did they captivate the audience, they left many clamoring for more.

See more photos from other bands below:

Meanwhile, photos from the bikers’ carnival parade are still trending on social media. No fewer than 200 sleek cars and bikers from the United States, Canada, Germany and Australia participated in the bikers carnival at the ongoing 2018 Calabar Carnival tagged ‘Wonders on Wheels’.

The event which is an initiative of Governor Ben Ayade, was held on Thursday, December 27 in Calabar, the Cross River state capital and just as expected, the commencement of the carnival was welcomed with an ecstatic atmosphere.